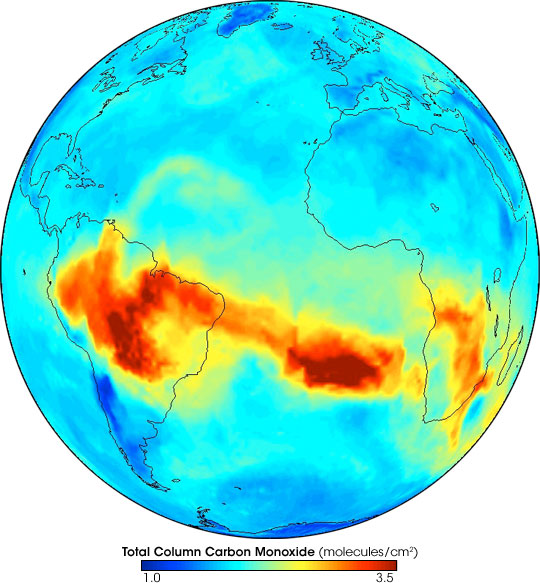 The streak of red, orange, and yellow across South America, Africa, and the Atlantic Ocean in this image points to high levels of carbon monoxide on September 30, 2005, as measured by the Atmospheric Infrared Sounder (AIRS) instrument flying on NASA’s Aqua satellite. The carbon monoxide primarily comes from fires burning in the Amazon basin, with some additional contribution from fires in southern Africa. The fires blanketed much of South America with smoke, as shown in a photo-like image captured by the MODIS sensor on the Aqua satellite on September 20. The animation (available by clicking on the image) shows carbon monoxide, one component of the smoke, sweeping east throughout August and September 2005. Fires in Africa probably contributed to the high concentrations of carbon monoxide over Africa and the Indian Ocean.

Released when carbon is burned, carbon monoxide is a harmful pollutant that reduces the amount of oxygen that can reach tissue and organs in the body. Additionally, carbon monoxide is a precursor to ground-level ozone and smog, so a global measurement of the gas provides a good indicator of the overall health of the atmosphere. On a global basis, nearly 50 percent of carbon dioxide emissions come from man-made sources, and the rest come from biomass burning, as shown here, or natural sources, says Dr. Wallace McMillan from the University of Maryland Baltimore County and the Joint Center for Earth Systems Technology.

AIRS’ global carbon monoxide measurements are important, says McMillan, because for the first time scientists can monitor the transport of fire emissions around the globe on a daily basis. Previously, carbon monoxide measurements came from satellite instruments that saw only part of the Earth each day or from weather balloons. Prior to AIRS, scientists had to integrate those observations with computer models to infer the day-to-day impact of fire emissions on the atmosphere. AIRS provides daily, global coverage. AIRS also measures some of the key atmospheric gases that affect climate, including ozone, methane, and dust and other aerosols.