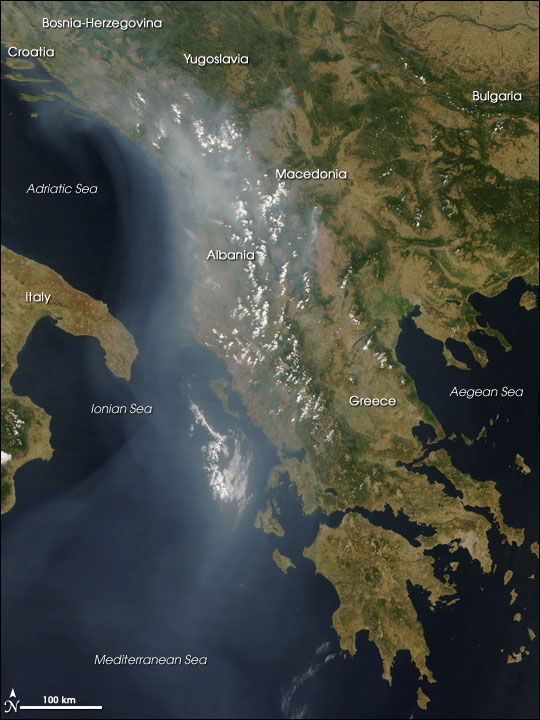 Wildfires across the Balkans filled the skies with smoke in late July 2007. The Moderate Resolution Imaging Spectroradiometer (MODIS) on NASA’s Terra satellite captured this image of the area on July 29, 2007. Places where the sensor detected actively burning fires are marked with red dots. Thick smoke blows southward hundreds of kilometers from the eastern shores of the Adriatic Sea to the Mediterranean Sea.

According to a July 27, 2007, report from ReliefWeb, Macedonia had experienced extensive forest fires since the beginning of the month, with extreme temperatures exacerbating the problem starting in the middle of the month. Some two hundred Macedonians had been evacuated to protect them from smoke poisoning.

On July 29, 2007, ABC News Australia reported extensive fires in Macedonia, Greece, and Bulgaria, where roughly 56,800 acres (230 square kilometers) had burned during the previous week. The continuing fires threatened Rila, a tenth-century monastery, and UNESCO World Heritage site in Bulgaria. ABC reported that arson was suspected in some of the fires.

The large image provided above has a spatial resolution (level of detail) of 250 meters per pixel. The MODIS Rapid Response Team provides twice-daily images of the region in additional resolutions. The Earth Observatory also provides additional images of this event.

High temperatures exacerbated scores of large forest fires in southern Europe in late July 2007. The fires continued off and on through the end of August.