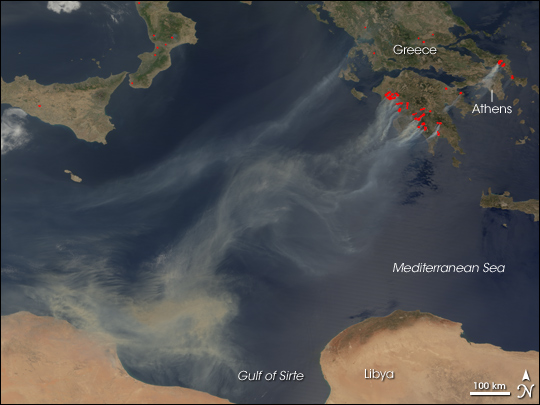 Deadly wildfires in southern Greece wafted thick clouds of smoke over the Mediterranean Sea in late August 2007. According to news reports from the British Broadcasting Corporation (BBC), at least 60 people had been killed by the fires as of August 27. Hundreds of homes had been burned, and thousands of people had to evacuate, many by helicopter. The government suspects that the fires were caused by arson, and it has declared a national emergency to deal with the situation. Firefighters from more than 20 countries had arrived to help control the fires.

This image of Greece was captured by the Moderate Resolution Imaging Spectroradiometer (MODIS) on NASA’s Terra satellite on August 26, and places where MODIS detected actively burning fires are outlined in red. A line of fires stretches along the western coast of Greece’s Peloponnesus Peninsula. To the northeast, a large fire is casting a plume of smoke over Athens. With its brownish tinge, the smoke pooled over the Gulf of Sirte could easily be mistaken for dust from the deserts of Libya. Dust storms often travel the other direction across the Mediterranean: from Africa to Greece.

The large image provided above has a spatial resolution (level of detail) of 250 meters per pixel. The MODIS Rapid Response Team provides twice-daily images of the region in additional resolutions and formats. More recent images of the area (August 28) show that the fires were still burning, but winds appeared to be calmer. Calmer winds and partly cloudy skies may have provided a brief break for firefighters.

Smoke from Fires in Greece

Smoke from deadly fires in Greece blows across the Mediterranean Sea and pools over the Gulf of Sirte.