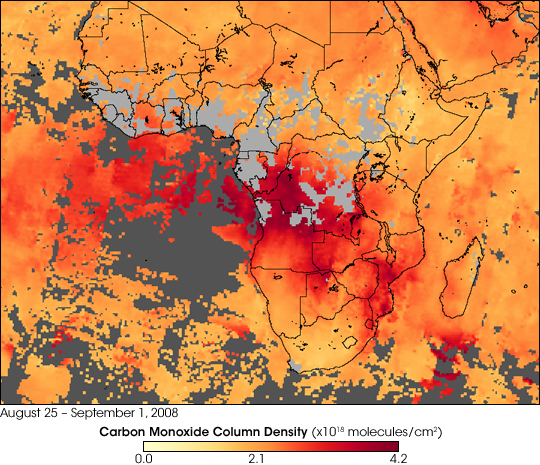 In southern Africa, people light thousands of fires for managing crop and pasture land during the annual dry season. Although such fires are not necessarily immediately hazardous, they have a strong influence on climate and air quality. One way to track the impact of these fires on atmospheric chemistry is through observations of carbon monoxide, a colorless, long-lived gas that results when vegetation burns.

This image of Africa reveals carbon monoxide concentrations between August 25 and September 1, 2008, based on data from the Measurements of Pollution in the Troposphere sensor (MOPITT) on NASA’s Terra satellite. Places where the amount of carbon monoxide was very high in the column of air between the satellite and the Earth’s surface are red. The high concentrations of carbon monoxide off the west-central coast of the continent are linked to widespread agricultural burning that is common this time of year in Angola and neighboring countries. The pocket of high carbon monoxide over southeastern Africa is linked to intense fires in Mozambique and South Africa.