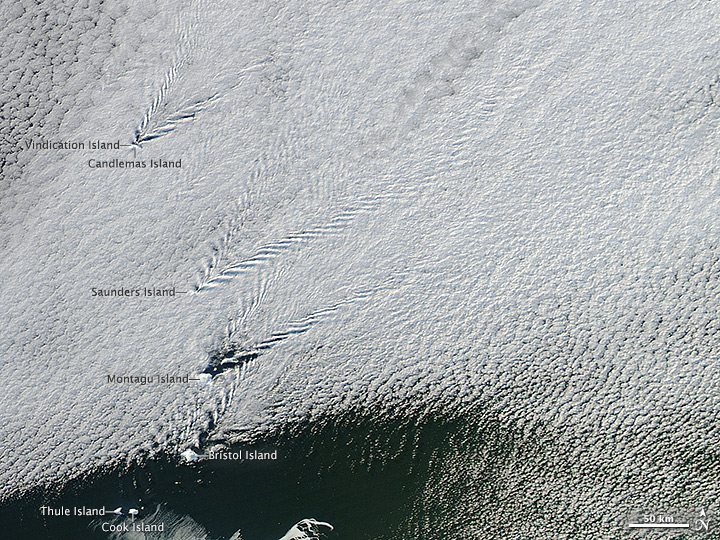 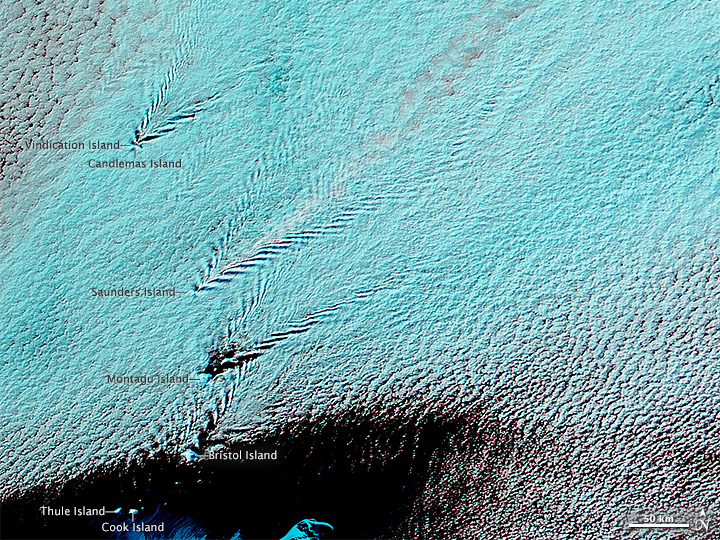 The South Sandwich Islands, in the far southern Atlantic Ocean, are often shrouded in thick clouds and difficult to view from space. Sometimes, however, the use of false-color imagery can reveal events that would otherwise be obscured under cloud cover.

On May 1, 2013, the Moderate Resolution Imaging Spectroradiometer (MODIS) aboard NASA’s Aqua satellite flew over the South Sandwich Islands and captured these views. The top image shows the area in natural color, while the lower image shows the scene in a combination of middle infrared, infrared, and visible (red) light (MODIS bands 7, 2, and 1) to distinguish clouds from snow and ice. (Click on the downloadable large image from April 23 to see the islands without cloud cover.)

In the natural-color image, the islands are a bit hard to distinguish from the mottled cloud cover. The V-shaped wakes and striped patterns in the clouds hints at the location of the volcanic islands, which stick up above the sea surface and disturb the otherwise uniform flow of air masses across the ocean. The mountain peaks create ripples and waves in the atmosphere that play out over hundreds of kilometers. The stripes in the blanket of marine layer clouds reveal the crests and troughs in air flow. The crests, where moist air rises and condenses into clouds, are bright; the troughs, where drier air sinks back toward the ocean, are cloud-free.

In the top image, there is a faint depression trailing southwest to northeast from Saunders Island. The lower, false-color image shows this more plainly. The trail is a volcanic plume from Mount Michael, and it forms swirling eddies—Von KÃ¡rmÃ¡n vortices—as it blows to the northeast. The surrounding clouds are light turquoise because of the presence of colder water droplets and ice crystals. In false-color, the ocean is black and the ice-covered islands are bright turquoise.

The gas, steam, and ash in the volcanic plume reflects all three wavelengths of light and appears nearly white. Researchers have learned that even small eruptions can affect cloud cover and weather. The tiny solid and liquid particles in the plume (aerosols) act as seeds for the formation of cloud droplets. However, those particles and droplets are much smaller than those in other types of clouds, appearing brighter and denser.