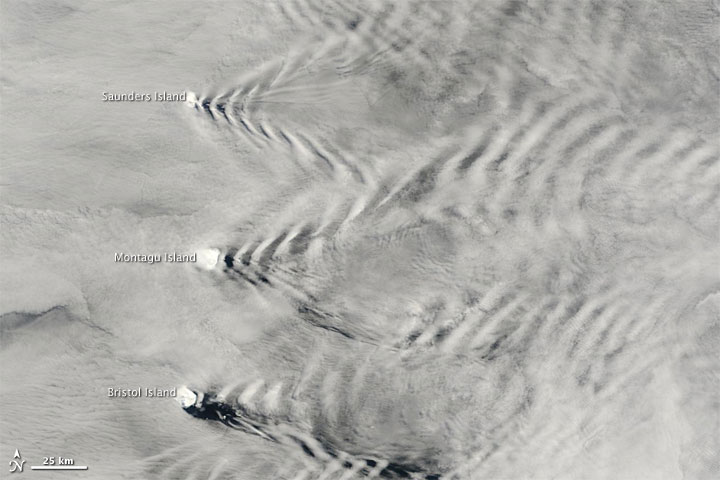 As they cross the ocean, ships make waves in the water. Even though they sit still, islands can make equally dramatic waves—in the air. This was the case in the southern Atlantic Ocean in late November 2009. The South Sandwich Islands conspired with air currents to make wave patterns in clouds.

The Moderate Resolution Imaging Spectroradiometer (MODIS) on NASA’s Terra satellite captured this natural-color (photo-like) image on November 23, 2009. Saunders, Montagu, and Bristol Islands, part of the South Sandwich chain, all trigger V-shaped waves that fan out toward the east. The white clouds over the dark ocean water vaguely resemble zebra stripes.

The South Sandwich Islands are of volcanic origin—Bristol and Montagu have been active during recorded history—and all the islands poke rugged summits above the ocean surface. The islands disturb the smooth flow of air, creating waves that ripple through the atmosphere downwind of the obstacles.

The cloudy-clear pattern that is produced highlights the location of wave crests and troughs. The moist, cloudy air over the ocean (meteorologists call this the marine layer) is often capped by a layer of dry air. When the wave ripples through the atmosphere downwind of the islands, clouds form (or persist) at the crests of the waves because air cools as it rises, and water vapor condenses into cloud droplets. In the wave troughs, however, some of the dry air from above sinks into marine layer, replacing the cloudy air. In addition, as air sinks, it warms, causing clouds to evaporate.