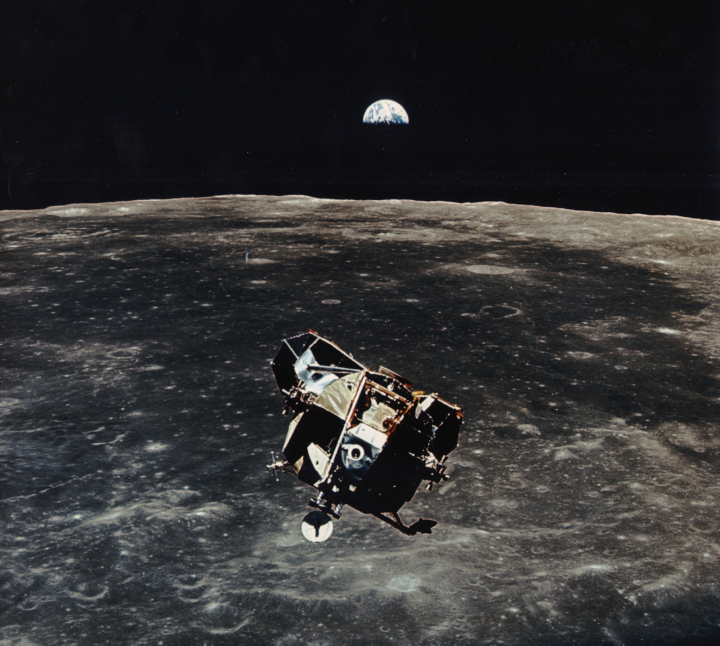 This photo shows the Eagle lunar module as it carried Neil Armstrong and Buzz Aldrin to a rendezvous with the Columbia command and service modules after a 22-hour stay on the Moon. Shot by Apollo 11 astronaut Michael Collins, the image was acquired just before docking at 21:34:00 Universal Time (5:34 p.m. U.S. Eastern Daylight Time) on July 21. Collins was looking west as Earth rose above the horizon. The dark-colored mare in the background is Smyth’s Sea (85° east longitude, 2° south latitude on the Moon).

Only 24 people have seen Earth from the surface or orbit of the Moon. All of them were changed by it. While they were proud of and awed by the achievement of visiting another rock in the solar system, they also grew ever more fond of their precious home. In an interview for In the Shadow of the Moon, Michael Collins noted: “Oddly enough the overriding sensation I got looking at the Earth was: My God, that little thing is so fragile out there.”

Neil Armstrong was humbled when he considered his place in the universe. “It suddenly struck me that that tiny pea, pretty and blue, was the Earth. I put up my thumb and shut one eye, and my thumb blotted out the planet Earth. I didn’t feel like a giant. I felt very, very small.”

Fifty years later, as we celebrate engineering and scientific achievement...as we honor bravery, ingenuity, and tenacity...as we look back and look ahead with a spirit of exploration...we also recall that there is no place quite like the home we have.

Astronaut photograph AS11-44-6642 was acquired on July 21, 1969, with a Hasselblad camera with a 70 mm lens and is provided by the ISS Crew Earth Observations Facility and the Earth Science and Remote Sensing Unit, Johnson Space Center. The image has been cropped and lightly enhanced to improve contrast, and lens artifacts have been removed. Additional images taken by astronauts and cosmonauts can be viewed at the NASA/JSC Gateway to Astronaut Photography of Earth. Story by Michael Carlowicz.