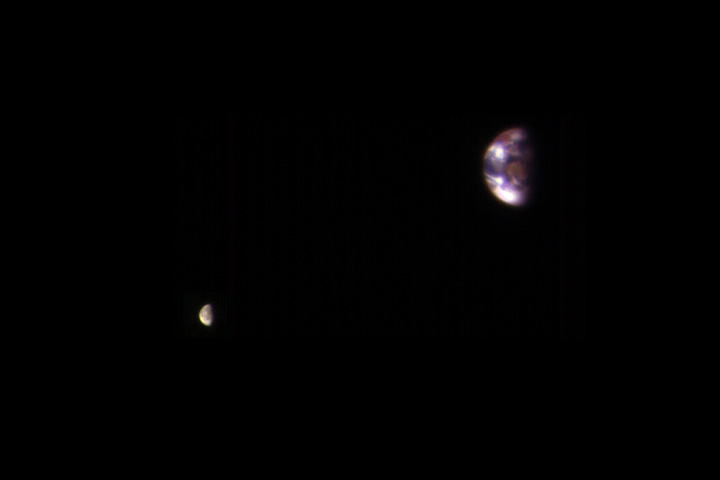 A new composite image that shows Earth and the Moon in one frame is neither the first nor the clearest of its type. Still, this recent image from a powerful telescope orbiting Mars is a humbling reminder of how small and interconnected our planet appears when viewed from afar.

The image combines two separate exposures taken on November 20, 2016, by the High Resolution Imaging Science Experiment (HiRISE) camera on NASA’s Mars Reconnaissance Orbiter. The satellite was about 205 million kilometers (127 million miles) away from Earth when the images were acquired. For comparison, the circumference of the Earth at the equator is about 40,000 kilometers (25,000 miles). The distance between Earth and the Moon is about 30 times the diameter of Earth. Earth and the Moon appear closer than they actually are in this image because the observation was planned for a time at which the Moon was almost directly behind Earth, from Mars’ point of view, to see the Earth-facing side of the Moon.

The images were taken in order to calibrate HiRISE data, since the reflectance of the Earth-facing side of the Moon is well known. These new images were processed separately to optimize detail on both Earth and the Moon because the Moon is much darker than Earth and would barely be visible if shown at the same brightness scale. The separate images were then were combined into one at the correct relative positions and sizes.

This portrait of home is a false-color image. HiRISE takes images in three wavelength bands: infrared, red, and blue-green, which are displayed here as red, green, and blue, respectively. This treatment of the data causes green vegetation to appear red. The landmass shown in the middle of Earth is Australia. Northwest of it, the lush vegetation of Southeast Asia and Asia gives that continent a red hue. The bright area near Earth’s southern pole is Antarctica. Other bright areas are clouds. The image also shows the western near-side of the Moon, which has large, dark, basaltic plains called maria.

Image by the the High Resolution Imagine Science Experiment (HiRiSE) science team, which works closely with NASA Jet Propulsion Laboratory, Caltech, and the University of Arizona. Text by Adam Voiland based on image releases from these institutions.