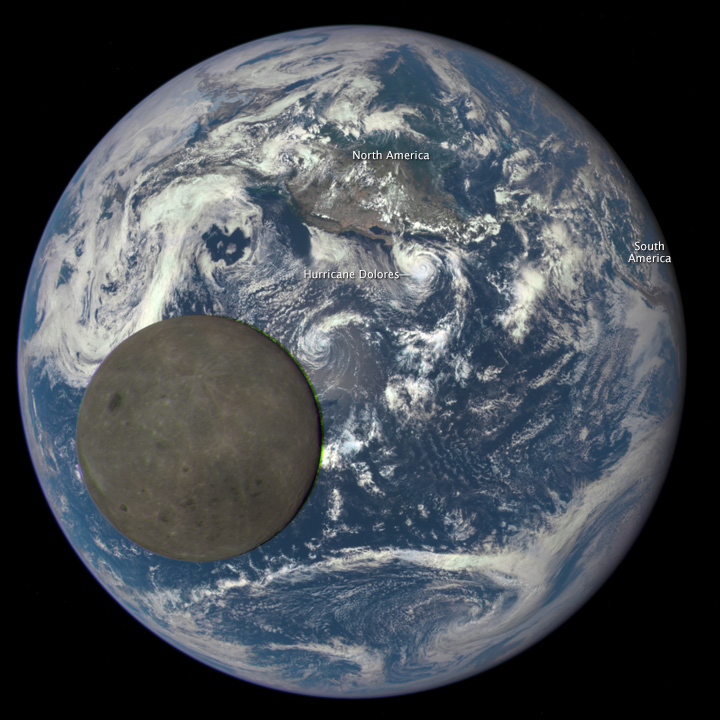 A NASA camera aboard the Deep Space Climate Observatory (DSCOVR) has captured a unique view of the Moon as it passed between the spacecraft and Earth. A series of test images shows the fully illuminated “dark side” of the Moon that is not visible from Earth.

The images were acquired by NASA’s Earth Polychromatic Imaging Camera (EPIC), a four megapixel CCD camera and telescope on the DSCOVR satellite, which orbits about 1.6 million kilometers (1 million miles) from Earth. EPIC maintains a constant view of the fully illuminated Earth as it rotates, providing daily scientific observations of ozone, vegetation, cloud height, and airborne aerosols. About twice a year the camera will capture images of the Moon and Earth together as the orbit of DSCOVR crosses the orbital plane of the Moon.

The images shown above and in the movie below were taken over the course of five hours on July 16, 2015. The North Pole is toward the upper left, reflecting the orbital tilt of Earth from the vantage point of the spacecraft.

The far side of the Moon was first observed in 1959, when the Soviet Luna 3 spacecraft returned the first images. Since then, several missions by NASA and other space agencies have imaged the lunar far side. (For instance, NASA’s Deep Impact spacecraft captured a similar view of Earth and the Moon from a distance of 31 million miles in 2008.) The same side of the Moon always faces an earthbound observer because the Moon’s orbital period is the same as its rotation around its axis.

EPIC’s natural-color images of Earth are generated by combining three separate monochrome exposures taken by the camera in quick succession. EPIC takes a series of 10 images using different spectral filters—from ultraviolet to near infrared—to produce a variety of science products. The red, green, and blue channel images are used in these color images. But combining three images that are taken about 30 seconds apart produces a slight but noticeable camera artifact on the edges of the Moon. Because the Moon moved in relation to Earth between the time the first (red) and last (green) exposures were made, a thin green offset (about 7–8 pixels) appears on the right side when the three exposures are combined. This movement also produces a slight red and blue offset on the left side of the unaltered images. 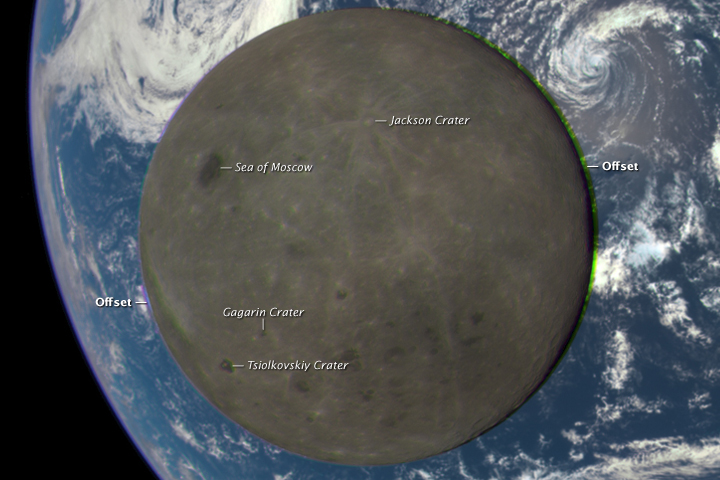 The lunar far side lacks the large, dark, basaltic plains, or maria, that are so prominent on the Earth-facing side. The largest far side features are Mare Moscoviense (Sea of Moscow) in the upper left and Tsiolkovskiy crater in the lower left.

Situated at a stable orbit between the Sun and Earth, DSCOVR’s primary mission is to monitor the solar wind for space weather forecasters at the National Oceanic and Atmospheric Administration (NOAA). Its secondary mission is to provide daily color views of our planet as it rotates through the day.

NASA image courtesy of the DSCOVR EPIC team. Caption by Rob Gutro, with Mike Carlowicz. DSCOVR is a partnership between NASA, NOAA and the U.S. Air Force, with the primary objective of maintaining the nation’s real-time solar wind monitoring capabilities.