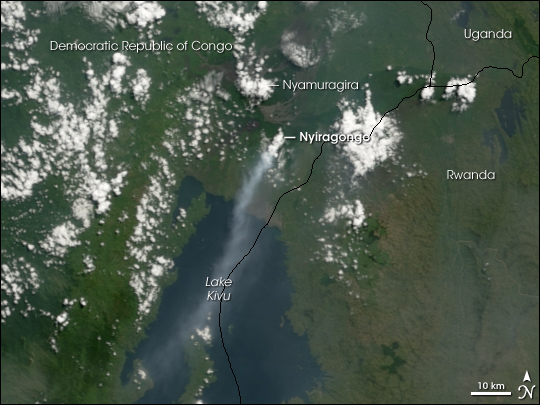 On June 19, 2007, Mount Nyiragongo released a plume. The Moderate Resolution Imaging Spectroradiometer (MODIS) on NASA’s Terra satellite took this picture the same day. In this image, the blue-tinted plume blows over Lake Kivu toward the southeast. The plume’s light color suggests that it contains more water vapor than ash. A bright, opaque white puff at the volcano’s summit could be part of the plume, but it is more likely a patch of clouds. Clouds also hover over neighboring Mount Nyamuragira, to the northwest.

Nyiragongo is a stratovolcano—a steep-sloped cone composed of alternating layers of hardened lava, solidified ash, and rocks ejected by previous eruptions. For five decades, the volcano cradled an active lava lake in its summit crater. The lava lake drained in 1977, causing numerous fatalities. In 2002, lava flows from the volcano covered parts of the nearby city of Goma.

Neighboring Nyamuragira (also known as Mount Nyamulagira) is a shield volcano—a shallow-sloped volcano resembling a giant warrior shield—formed from hardened lava flows. Despite its lower profile, it, too, harbored a lava lake in its summit crater. That lake drained in 1938, at the same time as a major eruption from one of the volcano’s flanks. Historically, lava flows from this volcano have reached Lake Kivu. This volcano experienced a significant eruption in November 2006.

You can download a 250-meter-resolution KMZ file of Nyiragongo for use with Google Earth.