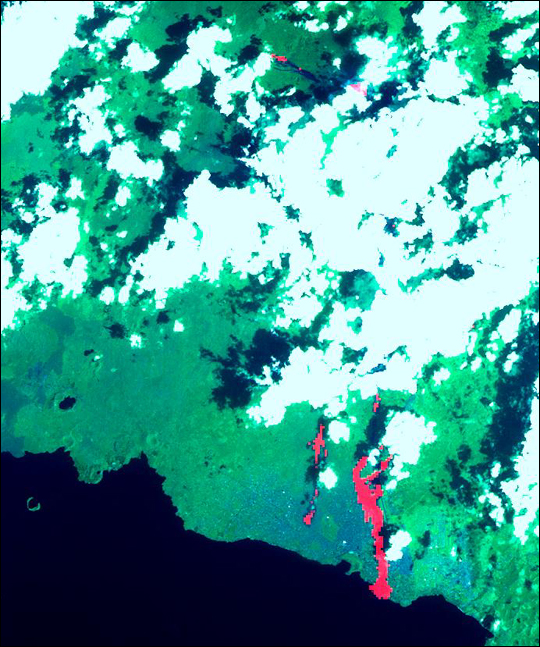 A river of molten rock poured from the Nyiragongo volcano in the Democratic Republic of the Congo on January 18, 2002, a day after it erupted, killing dozens, swallowing buildings and forcing hundreds of thousands to flee the town of Goma. The lava flow continued into Lake Kivu.

One of Africa's most notable volcanoes, Nyiragongo contained an active lava lake in its deep summit crater that drained catastrophically through its outer flanks in 1977. Extremely fluid, fast-moving lava flows draining from the summit lava lake in 1977 killed 50 to 100 people, and several villages were destroyed.

This scene was acquired on January 28, 2002, by the Advanced Spaceborne Thermal Emission and Reflection Radiometer, flying aboard NASA’s Terra satellite. In this scene, the Nyiragongo volcano itself is covered by clouds, but Goma is visible to the south, situated on the northern shore of Lake Kivu. The bright red ribbons radiating away from the volcano are the hot lava flows. This false-color image covers an area of 21 by 24 km, and combines a thermal band in red, and two infrared bands in green and blue.