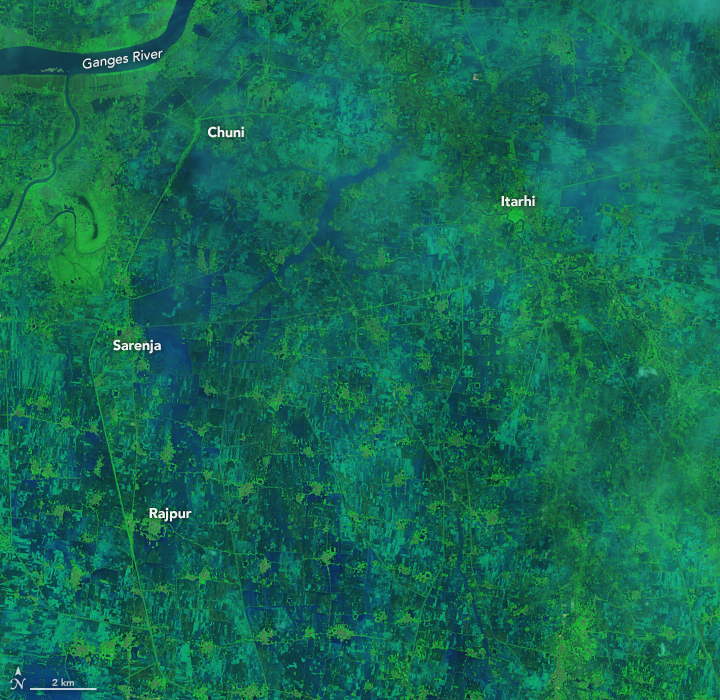 Following months of drought that parched large swaths of India, the nation and several of its neighbors are now coping with dangerous flooding. At least seven million people in India, Nepal, Bangladesh, and Pakistan have been displaced or had their lives disrupted by flooding in mid-July 2019. The culprit was heavy monsoon rains, which arrived a bit late and severe.

Thousands of villages and towns have been cut off by rising waters, as heavy rainfall between July 11-16 poured down on mountainous highlands and the lowlands. The surge of water caused landslides, swelled rivers, and made roads impassable. News media and international relief agencies have reported at least 200 deaths in the region.

The Operational Land Imager (OLI) on Landsat 8 passed over northeastern India and observed the inundated landscape through breaks in the cloud cover. The images show cities and towns in Bihar state in northeastern India, which endured some of the worst flooding. India’s Assam state and the countries of Nepal and Bangladesh also have faced dire conditions, some of which are visible in this wide view of the region.

The image pairs above and below were acquired on June 28 and July 14, 2019, and were composed from a combination of infrared and visible light (OLI bands 6-5-4) in order to better distinguish water (navy and dark blue) that is out of river banks and on the floodplains. Clouds are white or cyan, and vegetation-covered land is green.

The Brahmaputra River rose out of its banks in many locations across India and Bangladesh, and waters were still rising as of July 17. Millions of hectares of farmland were flooded. Officials were concerned about food and water supplies, as well as the potential for the spread of waterborne diseases.

One of the hardest hit areas is Bihar, a state in East India.