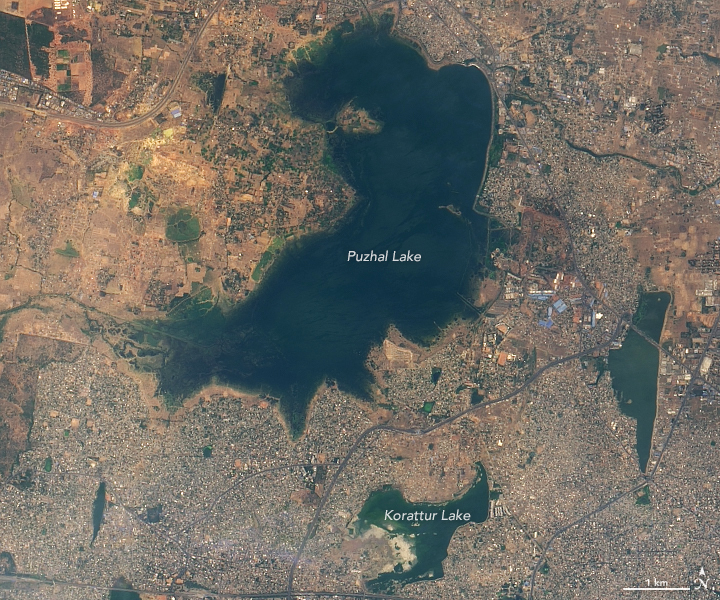 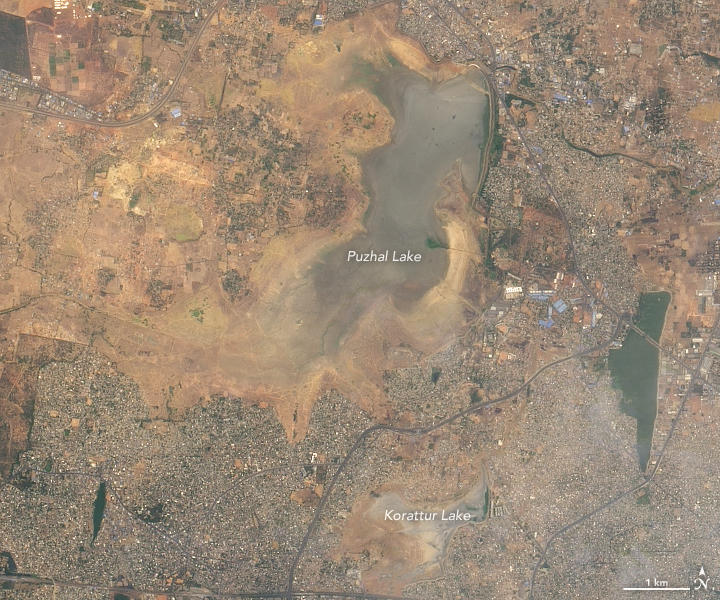 People across India are facing critical drought conditions and water shortages. As of June 25, 2019, nearly 65 percent of the country’s reservoirs were running dry. One of the worst affected areas has been the west-central state of Maharashtra, where six of the 17 reservoirs are dried out.

These images show Puzhal Lake, the primary rain-fed reservoir in Chennai in the southern state of Tamil Nadu. They were acquired on May 31, 2018 (left), and June 19, 2019 (right), by the Operational Land Imager on Landsat 8. Puzhal Lake (also known as Red Hills Lake) is one of four main reservoirs that serves the city of Chennai. In total, the four reservoirs were only at 0.2 percent capacity, as reported on June 21, 2019.

The water shortages are partly caused by low rainfall over the past few months. Chennai has been devoid of rain for nearly 200 days. In 2018, the city experienced one of its weakest northeast monsoon seasons, which runs from October to December and provides a large portion of the area’s annual rainfall. Additionally, the southwest summer monsoon season from around June through September has been delayed across India and unable to deliver substantial rainfall to Chennai yet.

Chennai has been struggling to meet water demands for the past few years. The National Institution for Transforming India (a government think tank) reported Chennai, India’s sixth-largest city, was one of 21 cities that could run out of groundwater by 2020. Many news reports state the water shortages are due to low rainfall but also water management.

The dry conditions and low rainfall have been a common story across India this June, albeit to a lesser degree than in Chennai. From June 1 to June 26, the country received 36 percent less rainfall compared to the 50-year average. The dry conditions have been further exacerbated by intense heatwaves in May and June, a weather pattern that has been occurring more frequently in recent years.

The Indian Meteorological Department expects more rain in July and August, although monsoon seasons have been producing less rain than normal lately. According to the South Asia Drought Monitor, more than 44 percent of the country is experiencing drought conditions, which may not completely subside after summer monsoon season.