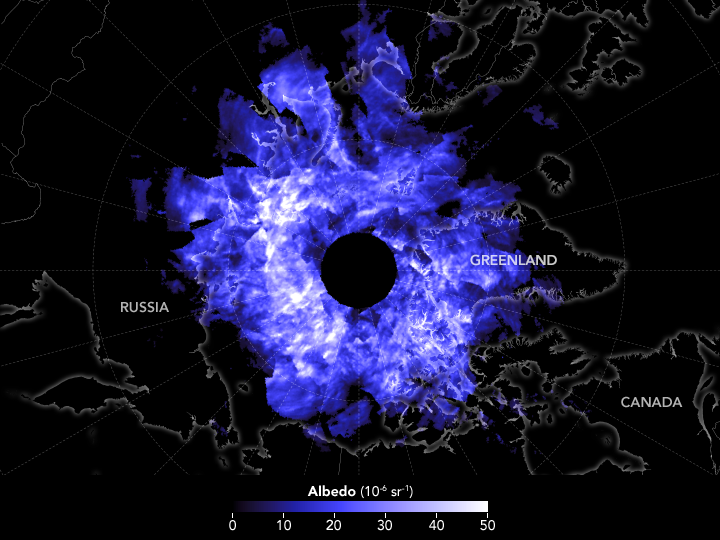 As spring turns to summer in the northern hemisphere each year, unusual streaks of clouds form high in the atmosphere around sunset in the world’s high latitudes (typically 50° to 65° North). On some days, the clouds are visible at middle latitudes. In June 2019, they have been stretching as far south as anyone can remember.

The image above shows a satellite view of noctilucent or “night shining” clouds on June 12, 2019. Noctilucent clouds draw their name from the fact that they appear in the twilight hour just after sundown. They float so high in the atmosphere that they are still lit by sunlight even after the Sun has dropped below the horizon for people on the ground.

The image is centered on the North Pole and is based on data acquired by NASA’s Aeronomy of Ice in the Mesosphere (AIM) spacecraft. The instrument measures albedo, or the amount of light reflected back to space by the high-altitude clouds. The map is a composite view stitched together from several satellite passes.

As Earth’s lower atmosphere warms with spring and summer, the upper atmosphere grows cooler. In the process, ice crystals collect on meteor dust and other particles, creating electric blue wisps on the edge of space—usually 80 to 85 kilometers (50 to 53 miles) in altitude. In the AIM map, noctilucent clouds appear in various shades of light blue to white, depending on the density of the ice particles.

According to amateur astronomers, citizen scientists, and several media outlets, noctilucent clouds have regularly appeared in the middle latitudes of North America and Europe in June 2019. Spaceweather.com reported an outbreak of the clouds on June 8-9 that was visible from Oklahoma, New Mexico, and the southern California desert. Reports have come in from many countries in Europe, as well. The season typically starts in late May and ends in August.

Since the launch of AIM in 2007, researchers have found that noctilucent clouds are stretching to lower latitudes with greater frequency. There is some evidence that this is a result of changes in the atmosphere, including more water vapor, due to climate change. Spaceweather.com reported that AIM mission scientists at the University of Colorado have observed more moisture in the mesosphere in June 2019 than they have observed in 12 years.

The clouds are also more common during solar minimum, the lowest ebb of solar flares and sunspots in the Sun’s 11-year cycle of activity. Lower solar activity means there is a bit less ultraviolet radiation breaking up the water molecules at high altitudes. The Sun is currently near its minimum. 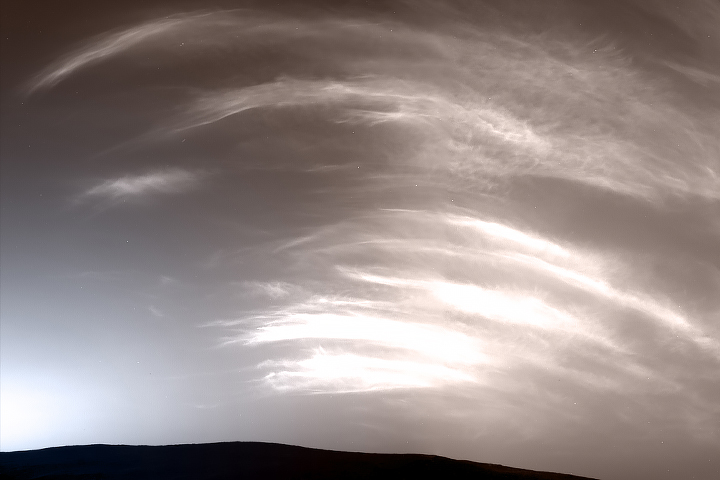 Another NASA vehicle also observed noctilucent clouds recently. The Curiosity Mars rover acquired an image of the clouds in the skies over Mars on May 17, 2019, or sol 2,410 of the mission. The image above was acquired by Curiosity’s Navcams while looking up from Gale Crater.

NASA Earth Observatory image by Joshua Stevens, using Cloud Imaging and Particle Size (CIPS) data from the NASA Aeronomy of Ice in the Mesosphere (AIM) mission and the University of Colorado Boulder. Photograph by NASA/JPL-Caltech/MSSS/Thomas Appéré. Story by Michael Carlowicz.