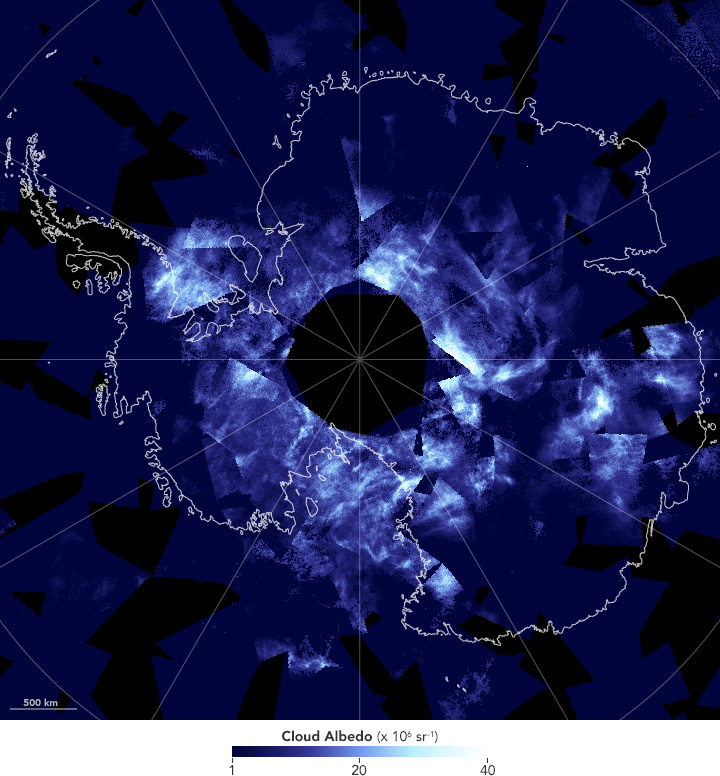 Strictly speaking, noctilucent or “night shining” clouds don’t glow in the dark the way the bioluminescent algae or fireflies do. Also called polar mesospheric clouds, they float high enough in the atmosphere to capture a little bit of stray sunlight, even after the Sun has fallen below the horizon. In this way, they have more in common with an actor being illuminated by a spotlight in front of a dark curtain.

Noctilucent clouds commonly occur at high latitudes in the late spring and early summer, before 24-hour daylight sets in. They form around both the North and South Pole, roughly 50 to 85 kilometers (30 to 55 miles) above the Earth’s surface.

NASA’s Aeronomy of Ice in the Mesosphere (AIM) spacecraft captured images of the clouds over Antarctica on November 29, 2016, a few weeks after they first appeared on November 17. The mosaic above was created using satellite data from several passes over the Antarctic. The AIM instrument measures cloud albedo—the amount of light reflected back to space. Lighter areas correspond to more brightly lit clouds, while areas with no data appear in black.

“The stratospheric winds in November-December are quite variable from year to year,” wrote Cora Randall of the University of Colorado in an email. “This year they transitioned to their summer-like state early, leading to the early season onset.”

The AIM mission first observed noctilucent clouds over the Arctic in 2007, and the clouds seem to be appearing earlier and at lower latitudes. They have been observed as far south as Utah and Colorado. Research has also shown that they have been getting brighter.