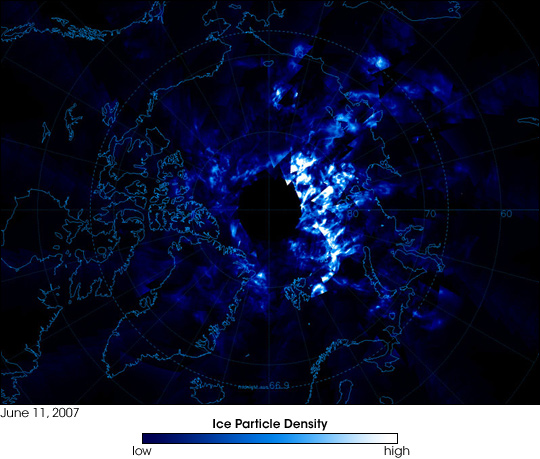 At high latitudes in the summer months, iridescent clouds form some 80 kilometers (50 miles) above the surface of the Earth. Their high altitude allows them to reflect sunlight after the Sun has set. These night-shining, or noctilucent, clouds long puzzled the researchers who studied them, who wondered how they formed. The clouds’ behavior grew even more mysterious over the past two decades as the clouds began to shine more brightly and appear at lower latitudes than they did before.

The first satellite designed to study noctilucent clouds, NASA’s Aeronomy of Ice in the Mesosphere (AIM) mission released the first view of these clouds over the entire Northern Hemisphere in 2007, at a resolution of approximately 5 kilometers (3 miles). This image, acquired on June 11, 2007, shows some of the first data AIM collected about these clouds. In this image, centered on the North Pole, white indicates clouds with the greatest density of ice particles, and dark blue indicates clouds with the lowest. Because ice particles reflect sunlight, a greater concentration of such particles creates a higher albedo—the ratio of reflected light to total incoming light. Areas of no data appear in black, and landmass outlines appear in blue-green.

Noctilucent clouds, also known as polar mesospheric clouds, form in a part of the atmosphere roughly 50 to 86 kilometers (30 to 54 miles) above the surface of our planet. In the months following AIM’s early observations, researchers working with the satellite shared some of their findings. They discovered that the clouds appear daily, are widespread, and vary on an hourly to daily basis. They also found that the clouds’ brightness varies over horizontal scales of about 3 kilometers (2 miles). To their surprise, the researchers also noticed that the ice in the mesosphere—the layer of the atmosphere where the clouds form—occurs in a single, continuous layer stretching from about 82 to 89 kilometers (51 to 55 miles) above the Earth’s surface.

By late 2007, AIM had documented the life cycle of noctilucent clouds in the Northern Hemisphere, noting that they first appeared around May 25 and lasted through late August. Although AIM had provided researchers with valuable information on noctilucent clouds by the end of the year, many other questions remained, and the researchers planned to keep watching AIM’s progress over the life of the mission.