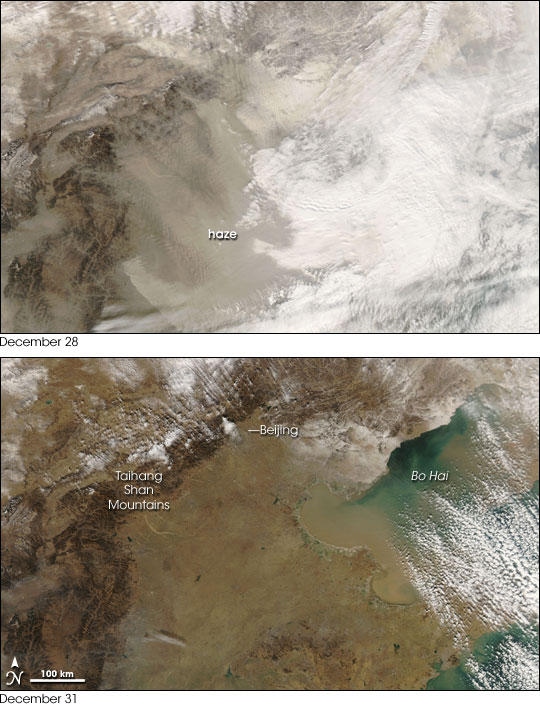 In preparation for hosting the 2008 Olympic games, Beijing set up air-quality monitoring stations throughout the city. Producing “Blue Sky” ratings, the stations took daily measurements of air pollution, with a rating of 500 being the worst, and a rating below 101 designated as a “Blue Sky” day. As 2007 drew to a close, the city was just one day shy of planners’ goal of 245 Blue Sky days for that year, and late December skies initially proved disappointing. December 27 had a value of 421, and December 28 reached 500, the maximum. But just as the goal looked lost, changing weather patterns pushed out the smog, enabling the city to surpass its goal by one day.

These images, from the Moderate Resolution Imaging Spectroradiometer (MODIS) flying on NASA’s Aqua satellite show the Beijing region on December 28, 2007 (top) and December 31, 2007 (bottom). In the top image, a combination of haze and clouds almost completely obscures the land surface, leaving only parts of the Taihang Shan Mountains visible. In the bottom image, sparse streaks of clouds dot the otherwise clear sky. Snow dusts the ground east and northeast of the city, and Bo-Hai is thick with tan-colored sediment.

Weather-monitoring stations in the Beijing region recorded major changes starting on December 29, as a cold, high-pressure system moved in from Siberia. Weather stations recorded an increase in wind, and a corresponding drop in dew point and relative humidity. Temperatures dropped on December 29 but rose again on the last day of the year. According to Chengcai Li of Peking University, northerly winds from Siberia often play a role in Beijing’s air quality.

Beijing’s monitoring stations measure pollution by tracking the amounts of sulfur dioxide, nitrogen dioxide, and particles whose diameter is 10 micrometers or smaller (called “PM 10.”) After calculating a 24-hour average for each pollutant, the Blue Sky system bases the day’s rating on the pollutant with the highest average. Ozone and “PM 2.5” (particles with diameters 2.5 micrometers or smaller) are not measured separately in the pollution ratings. For 2008, Beijing officials set a new goal of 256 Blue Sky days.

Thick haze collected in eastern China, south of Beijing, in December 2007, nearly preventing the city of Beijing from reaching its 2007 goal of low-pollution days. Haze remained in the area in the new year.