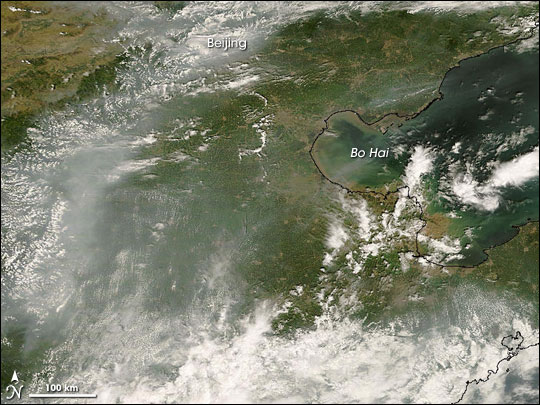 Just days before the 2008 Olympic Games, air quality fluctuated in Beijing as city residents undertook measures to reduce pollution. Restrictions on automobile use and the closure of some factories in the area began on July 20, 2008. According to atmospheric chemist Kenneth Rahn at the University of Rhode Island, however, these measures did not immediately reduce pollution.

The Moderate Resolution Imaging Spectroradiometer (MODIS) on NASA’s Terra satellite took this picture on August 5, 2008. Skies appear relatively clear over Bo Hai and along the coast, but a thick band of haze hovers over Beijing. This band of haze, however, is not a permanent fixture of the region. Two days earlier, MODIS captured clear skies over the city.

Besides high population density and rapid industrialization, Beijing’s location presents an ongoing challenge for maintaining healthy air quality. The city lies in an arid region not far from the Gobi Desert, and both factors lead to high levels of suspended particulate matter. In addition, wind patterns often transport pollution from other cities hundreds of kilometers away. A “blue-sky day” in Beijing is characterized as a day when trees, buildings, or people cast shadows, not necessarily when skies appear blue. As the 2008 Olympic Games approached, some visiting athletes planned to train outside the city, to minimize their exposure to pollution.