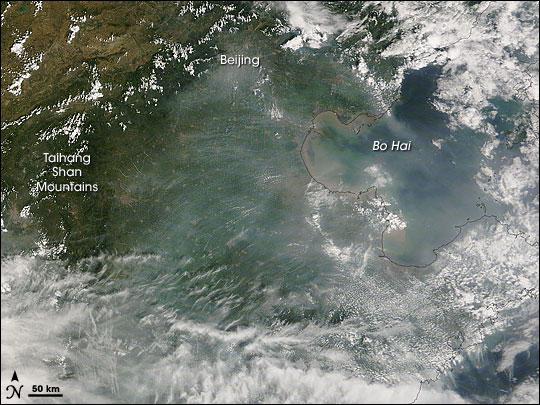 As Beijing prepared to host the Olympics August 8-24, 2008, and the Paralympics September 6-17, 2008, authorities implemented new procedures to reduce pollution. On July 20, 2008, special pollution controls took effect. Except for taxis and Olympic vehicles, automobiles were banned on alternate days, depending on whether their license plates ended in odd or even numbers. Most construction was halted in Beijing, and factories were shut down in Beijing and the neighboring cities of Tianjin and Tangshan.

The Moderate Resolution Imaging Spectroradiometer (MODIS) on NASA’s Terra satellite took this picture of Beijing and its surroundings on July 21, 2008. Compared to conditions in eastern China the previous month, the haze in this image appears relatively light. Several factors, however, can affect how much haze collects in a region, including weather patterns and transport of pollutants from other areas. The thick haze over the Beijing region in early June 2008, for instance, might have resulted partly from smoke produced by Russian wildfires.

Traffic and industrial restrictions in China were expected to last for two months, and officials hoped the restrictions would reduce emissions by more than 60 percent.