Earth and the Moon 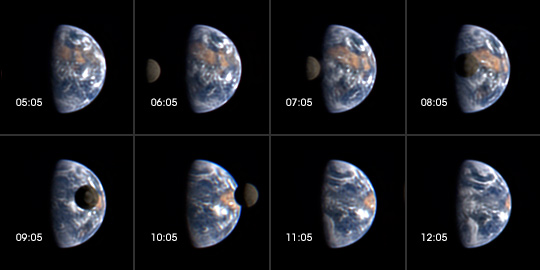 From 31 million miles away, how could you tell that there was life on Earth? Recently, scientists used the remote vantage point of NASA’s Deep Impact spacecraft to shoot a sequence of images that will help to help answer that question—and will guide them in the search for planets outside our solar system that could also harbor life.

Shot at 15 minute intervals on May 28 and 29, 2008, the images have been stitched together into a movie that encompasses one full rotation of Earth. The video capture the transit of the Moon across an Earth backdrop that starts with the western Pacific in view. A few of the images in the sequence are shown above. The first image shows eastern Africa and the Arabian Peninsula. In the final image, the Atlantic Ocean has rotated into view. Other spacecraft have imaged Earth and the Moon from space, but Deep Impact is the first to show a transit of Earth with enough detail to see large craters on the moon and oceans and continents on Earth.

A far cry from the very detailed images of our planet that satellites closer to Earth provide, the video suggests what attributes of a life-supporting planet we could recognize from tens of millions of miles away. “Our video shows some specific features that are important for observations of Earth-like planets orbiting other stars,” said Drake Deming of NASA’s Goddard Space Flight Center in Greenbelt, Maryland. Deming is leading the search for extra-solar (outside our solar system) planets during Deep Impact’s extended mission: a cruise to the Hartley 2 comet and a fly-by of it in November 2010.

Among the leading criteria for habitable planets is the presence of liquid water. How would you know from a distance of 10 million or more miles that Earth had oceans? “A ‘sun glint’ can be seen in the movie, caused by light reflected from Earth’s oceans, and similar glints [if they were observed] from extra-solar planets could indicate alien oceans,” Deming said in a NASA press release.

The scientists also made a version of the images and movie using infrared light instead of the normal red light to make the color composite images. That technique makes vegetated land masses much more visible because plants reflect near-infrared light more strongly than visible light. Thus, if a space telescope detected variations in the brightness of near-infrared light reflected by a distant planet as it rotates, that could be a signal of vegetation on the planet’s surface.

The initial Deep Impact mission sent the spacecraft to comet Temple 1. A smaller spacecraft was positioned in the path of the comet and the two were allowed to collide. The collision produced a crater and debris that were observed and measured by Deep Impact. NASA has extended the mission, renaming it EPOXI.

From 31 million miles away, how could you tell that there was life on Earth? Scientists used the remote vantage point of NASA’s Deep Impact spacecraft to shoot a sequence of images that will help to help answer that question.