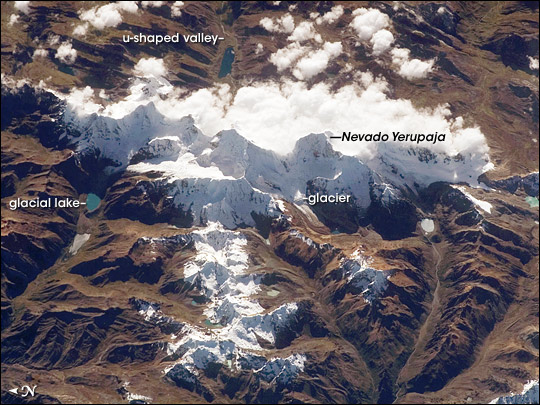 This astronaut photograph was taken looking east as the International Space Station was flying about 100 kilometers (about 62 miles) off the Peruvian coast and shows Cordillera Huayhuash (pronounced “Why-wash”). Clouds are banked up on the east side, snow covers all higher slopes and mountain peaks, and glaciers occupy lower slopes. This prominent but short mountain range (25 kilometers in length) boasts twenty peaks of remarkable steepness and ridge sharpness. Although only 100 kilometers from the coastline, six of the peaks reach above 6,000 meters (more than 19,500 feet); the highest is Nevado Yerupajá, Peru’s second highest peak, variously estimated as 6,617 and 6,635 meters high.

Widely considered the most spectacular peak in South America, Yerupajá is so steep that it has seldom been climbed. The best climbing approach is from the southwest, the face seen in this view. Yerupajá is locally known as El Carnicero (“The Butcher”) because of its blade-like ridges, typical of mountains that have been heavily eroded by glacial ice. Other features created by the erosive effect of flowing ice are small glacial lakes, which often vary in color due to different amounts of fine mud being fed into them by meltwater from under the glaciers. During the ice ages, the glaciers advanced many kilometers outward from the cordillera, occupying all the surrounding valley floors (all of which lie above 3,000 meters), producing U-shape valleys.

Astronaut photograph ISS017-E-7322 was acquired on May 17, 2008, with a Kodak 760C digital camera fitted with a 400 mm lens, and is provided by the ISS Crew Earth Observations experiment and the Image Science & Analysis Laboratory, Johnson Space Center. The image was taken by the Expedition 17 crew. The image in this article has been cropped and enhanced to improve contrast. Lens artifacts have been removed. The International Space Station Program supports the laboratory to help astronauts take pictures of Earth that will be of the greatest value to scientists and the public, and to make those images freely available on the Internet. Additional images taken by astronauts and cosmonauts can be viewed at the NASA/JSC Gateway to Astronaut Photography of Earth. Caption by M. Justin Wilkinson, NASA-JSC.

Shadows provide three-dimensional perspective for astronauts looking down on mountains.