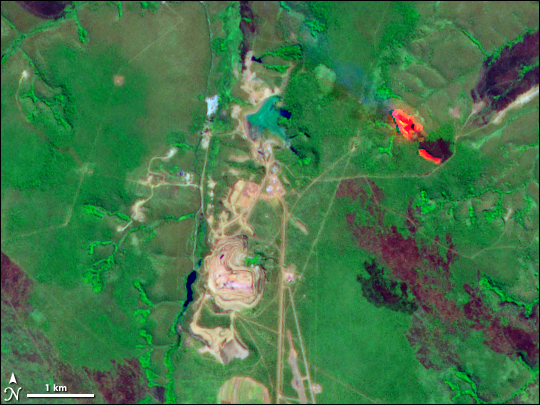 Diamonds form at great depths, some 150 kilometers (95 miles) below the surface of the Earth. They are often carried to the surface by kimberlite pipes—vertical tubes of magma that act as natural diamond-moving elevators. In terms of surface area, the Catoca kimberlite pipe in Angola is the fourth-largest diamond-rich rock formation on Earth.

The Advanced Spaceborne Thermal Emission and Reflection Radiometer (ASTER) on NASA’s Terra satellite captured this image of the Catoca diamond mine on June 21, 2001. In this false-color image, vegetation appears bright green, water appears dark blue, and bare ground appears beige-gray. Mining operations have removed vegetation cover, so the mine contrasts starkly with its surroundings.

According to a report issued by the United Nations Environment Programme (UNEP), the Catoca diamond mine requires the movement of a metric ton of rock for every carat mined. The mine’s massive movement of rock and soil is evident from the large areas of bare earth shown in this picture. Despite its size, the mine was constructed with an aim of minimal environmental impact. At the time of the report’s release in 2008, the mine had achieved that goal, but was expected to adopt new processes that could produce greater amounts of toxic waste.

Besides the Catoca diamond mine, ASTER observed an active fire burning northeast of the mine. The fire appears fluorescent red, and burn scars in the region appear dark red-purple. The burning fire and the burn scars might result from agricultural fires.