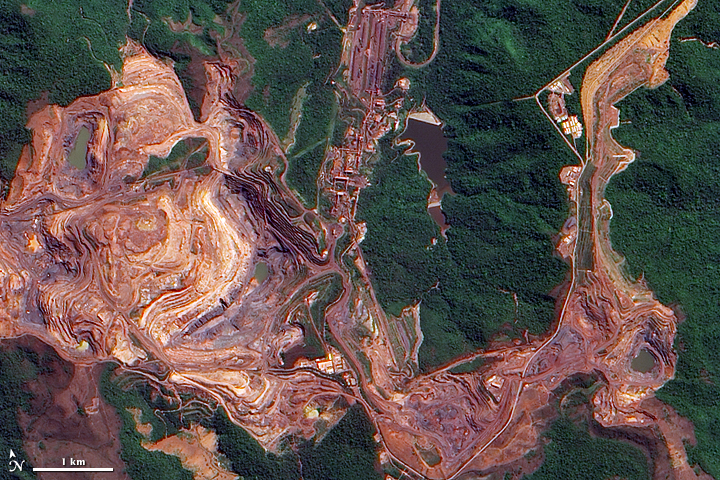 Finding one of the world’s largest deposits of iron ore in a remote corner of the Amazon rainforest was something of an accident, according to mining-technology.com. In 1967, a helicopter carrying a team of geologists from a Brazilian subsidiary of U.S. Steel landed on a barren hilltop to refuel. The geologists recognized iron ore on the surface of the hill, and four decades later, one of the world’s largest iron ore mines had taken its place.

This image of the Carajás Iron Ore Mine was taken by the Advanced Land Imager on NASA’s EO-1 satellite on July 26, 2009. Terraced layers of red earth reveal the method of mining. Carajás is an open-pit mine, in which minerals are removed from the surface one layer at a time. In 2007, 296 million metric tons of iron ore were pulled from the mine. The mine is estimated to contain about 18 billion tons of iron ore, plus gold, manganese, copper, and nickel.

The Carajás Mine sits in the Carajás mountain range (Serra dos Carajás) in northeastern Brazil. The mountain terrain is still evident in the untouched land around the mine. The red-tan exposed earth contrasts with the deep green rainforest. Companhia Vale do Rio Doce, the company that runs the mine, preserves the forest immediately around the mine. The large image, which encompasses a broader area, shows deforestation north and east of the mine.