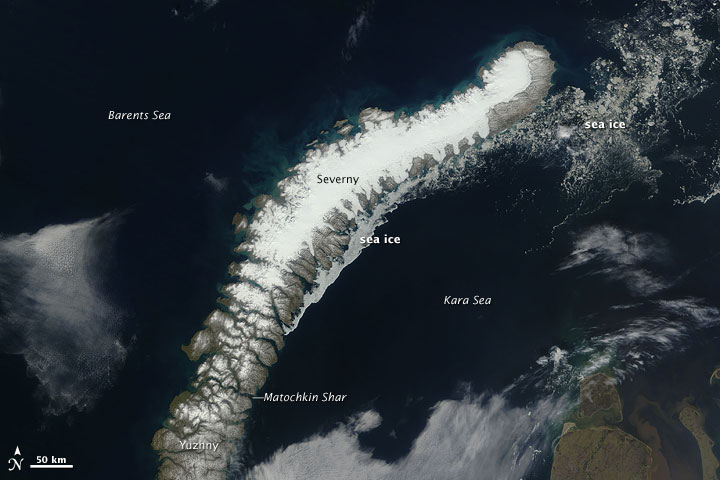 Novaya Zemlya is an Arctic archipelago off the coast of the Russian Federation. Besides several smaller isles, Novaya Zemlya consists of two major islands, Severny in the north and Yuzhny in the south, separated by a narrow strait, Matochkin Shar. An extension of the Ural Mountains, this mountainous archipelago has an average altitude of roughly 1,000 meters (3,280 feet) above sea level, and glaciers cover much of the northern island. In the latter half of the twentieth century, Novaya Zemlya was used as a nuclear test site.

The Moderate Resolution Imaging Spectroradiometer (MODIS) on NASA’s Terra satellite captured this true-color image of Novaya Zemlya on July 27, 2009. (This image focuses primarily on the northern island. See the high-resolution image for the entire archipelago.) The sparsely vegetated land appears in shades of beige and icy white. Hints of turquoise along the northwestern coast likely result from sediments running off the island, or getting churned up by currents from the ocean floor. A narrow band of sea ice hugs the southeastern coast, and smaller pieces of sea ice float off the northern island’s northeastern tip.

Before the turn of the twentieth century, Arctic sea ice used to linger along the coast of Novaya Zemlya’s larger island each July. After the turn of the century, however, increased summertime melt made open ocean more common.