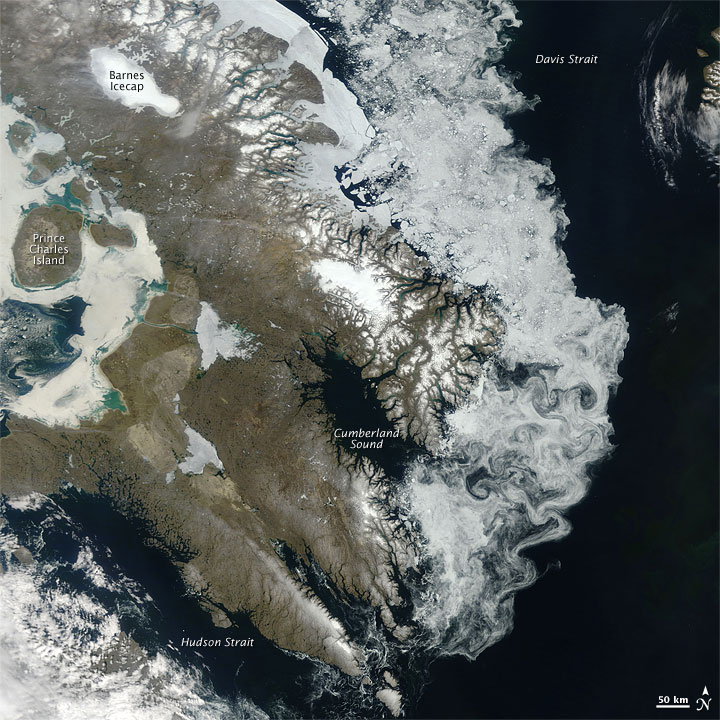 In the depths of winter, ice hugs the coastline of Canada’s Baffin Island. Summertime sunlight, however, dramatically melts the ice away from the coastline. Seasonal sea ice retreat was well underway when the Moderate Resolution Imaging Spectroradiometer (MODIS) on NASA’s Terra satellite acquired this natural-color (photo-like) image on July 11, 2009.

Clouds often hover over the Arctic during the Northern Hemisphere summer, making cloud-free images such as this one relatively rare. Although a few wispy clouds appear in the upper right and lower left corners of this image, the delicate swirls of white running along the eastern edge of Baffin Island are sea ice. Eddies along Baffin Island’s coast have fashioned the ice into interlocking swirls, especially near Cumberland Sound. Farther north, a long band of ice holds fast to the shore east of Barnes Icecap. Although less inclined to move with the currents, this ice also shows signs of weakening, as its edges splinter, and pieces float away.

The sea ice retreat captured in this image appears typical of seasonal melt. Since the turn of the twenty-first century, however, Arctic sea ice extent has declined sharply, experiencing a series of low summertime extents and poor wintertime recoveries. Arctic sea ice extent set a record low in September 2007. As of July 22, 2009, the National Snow and Ice Data Center reported that, in the first half of July 2009, sea ice declined faster than it did in 2008, but not as fast as it did in 2007.