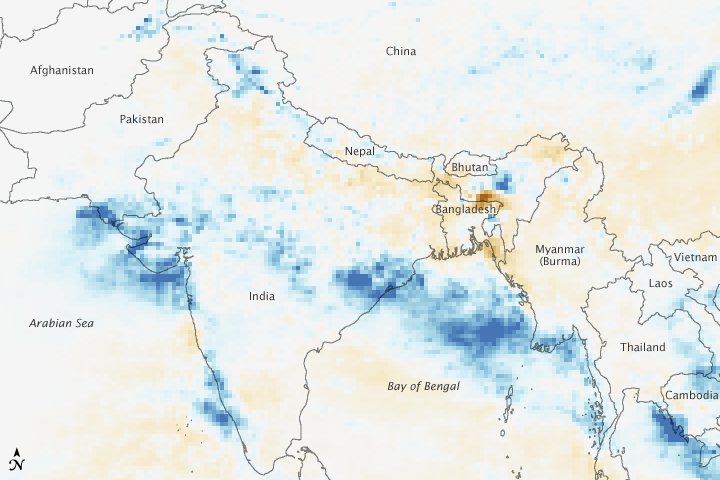 Summer sun bakes the Indian landscape, sending columns of heat into the atmosphere. The rising hot, dry air pulls in moist air from the surrounding ocean, and soon rains begin to fall. Summer is monsoon season in south Asia.

This image shows anomalies in rainfall between July 14 and July 20, 2009. Most of India and Bangladesh are brown, showing that less rain fell than average during the week. One of India’s primary crop areas is in the north, where less rain has fallen. According to BBC News, Bangladesh had received 40 percent less monsoon rain than normal by July 20, triggering fears of food shortages.

The rainfall patterns shown here are reminiscent of those seen during El Niño episodes. In an El Niño, the waters of the eastern tropical Pacific are warmer than normal, changing the distribution of rainfall around the globe. In general, the Indian monsoon tends to be weaker than normal during an El Niño episode. NASA measurements of the Pacific Ocean show signs that El Niño was developing during June 2009. On July 9, 2009, scientists at the National Oceanic and Atmospheric Administration announced that an El Niño had arrived.

Intense monsoon rain triggered destructive floods and landslides across Asia. This image shows unusually heavy rainfall over Pakistan, India, and parts of China during the first week of August 2010.