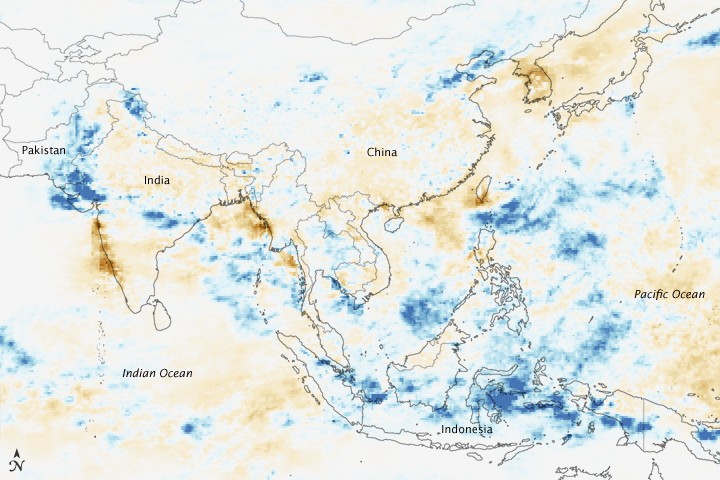 The first week of August 2010 brought extreme flooding and landslides to many parts of Asia. By August 11, floods in the Indus River basin had become Pakistan’s worst natural disaster to date, leaving more than 1,600 people dead and disrupting the lives of about 14 million people, reported Reuters. Across the border in northeast India, flash floods killed 185 with 400 still missing, reported BBC News. Floods in North Korea and northeast China buried farmland and destroyed homes, factories, railroads, and bridges. And in northwest China, rain triggered a massive landslide that left 702 dead with 1,042 missing, reported China’s state news agency, Xinhua. All of these disasters occurred as a result of unusually heavy monsoon rains, depicted in this image.

Made with data collected by NASA’s Tropical Rainfall Measuring Mission (TRMM) satellite, the image shows rain rates (the intensity with which rain was falling) between August 1 and August 9, 2010, compared to average rain rates for the same period. Blue reveals areas where rain was much more intense than normal, while brown points to less intense rain.

Dark blue spots cover the regions of Pakistan, India, and China where the floods and landslides occurred. These regions received as much as 24 millimeters of rain per day above normal daily rainfall. A broad swath of very intense rain also covers Indonesia and parts of the Indian and Pacific Oceans.

All of this rain comes as part of the Asian Monsoon. The Asian Monsoon occurs because of the temperature difference between the Eurasian continent and the ocean. In the summer, the land warms much more than the ocean. Heated air over the land rises, and cool, humid air from the ocean moves in to replace it. As the humid air warms over the land, it too rises and the water condenses into rain.

Asia’s summer monsoon varies in intensity from year to year for a variety of reasons. One of the strongest influences on the Asian Monsoon is the El Niño–La Niña oscillation. During La Niña years, the Eastern Pacific is cooler than average, while the western Pacific Ocean (by Asia) is warmer. Air over the ocean is warmer, more buoyant, and more humid. It rises higher and forms more intense storms.

La Niña usually enhances the Asian Monsoon, and it may have been a factor in shaping the intense 2010 monsoon. In July 2010, La Niña conditions had developed. Ocean temperatures in the western Pacific were warmer than normal. The patterns of unusually heavy rain seen in this image are similar to rainfall patterns caused by La Niña.

Additional factors may also have influenced the 2010 monsoon rains. The northern Indian Ocean was also warmer than normal. In particular, waters off the coast of Pakistan (the Arabian Sea) were much warmer than normal in satellite-based sea surface temperature measurements taken in July 2010. These enhanced temperatures are indicative of a shorter-scale weather pattern that also enhances monsoon rains.

Intense monsoon rain triggered destructive floods and landslides across Asia. This image shows unusually heavy rainfall over Pakistan, India, and parts of China during the first week of August 2010.