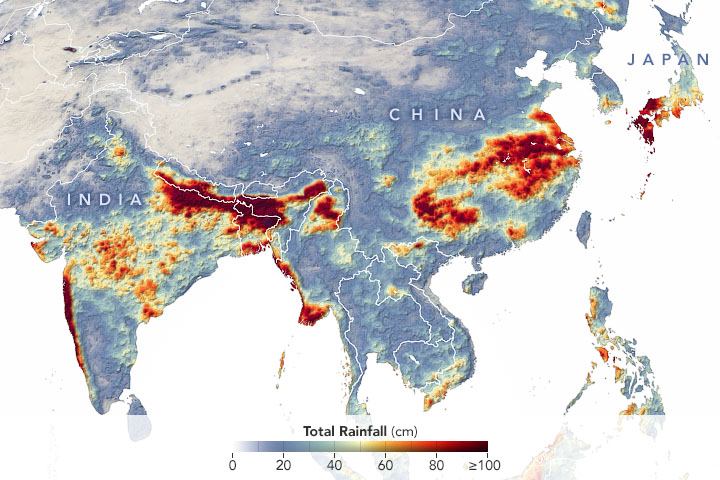 Rainfall that accompanies Asia’s summer monsoon plays an important role in the region’s economy by refilling aquifers, generating hydroelectric energy, and providing water for crops. In some years, however, the amount of rainfall breaks records in places. That has been the case in 2020. By mid-July, severe flooding affected millions of people across South and East Asia.

This map shows the rainfall accumulation across the region from June 1 (the start of the summer monsoon season) to July 20, 2020. The data are remotely-sensed estimates that come from the Integrated Multi-Satellite Retrievals for GPM (IMERG), a product of the Global Precipitation Measurement (GPM) mission. The darkest reds indicate places where GPM detected rainfall totals exceeding 100 centimeters (40 inches) during this period. Due to averaging of the satellite data, local rainfall amounts may be significantly higher when measured from the ground.

Note the particularly high rainfall totals across India. According to the World Meteorological Organization, many parts of central, north, and northeast India had received 15 centimeters (6 inches) more rainfall than usual by the middle of July. The northeast Indian state of Assam, for example, had received a total of 89 centimeters (35 inches) of rain between June 1 and July 22, about 20 percent more than normal. The rainfall spurred deadly flooding that cut off villages and displaced thousands of people. There were also reports of animals—including rare one-horned rhinos—that drowned when water levels rose in Assam’s Kaziranga National Park.

Since early June, unusually strong, stationary weather systems have produced frequent storms and heavy rainfall across south-central and eastern China. Dozens of rivers and lakes swelled to record high levels. Poyang Lake, for example, reached a record high of 22.6 meters on July 13, surpassing the annual average maximum of 19.2 meters. Across the wider region, flooding and landslides threatened villages and affected millions of people.

Monsoon rains also doused Japan. Just one week into July, parts of western Japan had received three times the amount of rainfall that is typical for the entire month. The deluge triggered floods and landslides that, according to news reports, caused the country’s highest rain-related death toll in more than three decades.

The monsoon is a familiar pattern in middle latitudes, occurring alongside seasonal shifts in atmospheric circulation patterns. This year, the low-pressure systems of Asia’s summer monsoon have been especially strong and stationary, allowing them to pick up even more moisture from the Indian and Pacific oceans and deliver it to land. Scientists continue to investigate changes in the Asian monsoon system that happen from year-to-year, as well as over millions of years.