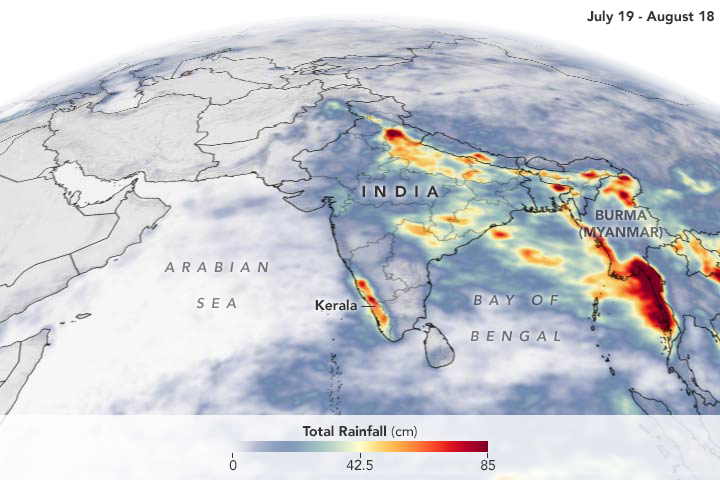 Editor’s note: This story has been edited to remove discussion of any role dam releases may have had in exacerbating the flooding. A thorough analysis of the causes of the flooding would require more information than satellite data can provide. (August 28, 2018)

Abnormally heavy monsoon rains drenched Southeast Asia, leading to the worst flooding in the state of Kerala since 1924. The event, which started with rains on August 8, 2018, displaced over a million people, led to hundreds of deaths, damaged over 50,000 houses throughout the region, and severely affected 13 of the 14 districts in Kerala. While it brought the region’s most intense flooding this summer, the rain was one of many high precipitation events in Kerala this monsoon season.

The image shows satellite-based rainfall accumulation from July 19 to August 18, 2018. Rainfall peaked in Kerala on July 20 and again reached abnormally high levels between August 8 and 16. Since the beginning of June, the region received 42 percent more rainfall than normal for this time period. In the first 20 days of August, the region experienced 164 percent more rain than normal.

Intense rainfall events have hit other areas of Southeast Asia as well. Eastern Myanmar experienced torrential downpours in mid-July and August, causing fatalities and displacing 150,000 people in one month. The floods were the worst in 30 years. The Bago and Sittaung rivers swelled to their highest levels in more than five decades, with the Sittaung river 7 feet above danger levels in areas.

The animation above shows rainfall accumulating starting from July 19 to August 18, 2018. Heavy rain started to fall over Myanmar around July 29.

These rainfall data are remotely-sensed estimates that come from the Integrated Multi-Satellite Retrievals (IMERG), a product of the Global Precipitation Measurement (GPM) mission. The GPM satellite is the core of a rainfall observatory that includes measurements from NASA, the Japan Aerospace Exploration Agency, and five other national and international partners. Local rainfall amounts can be significantly higher when measured from the ground. 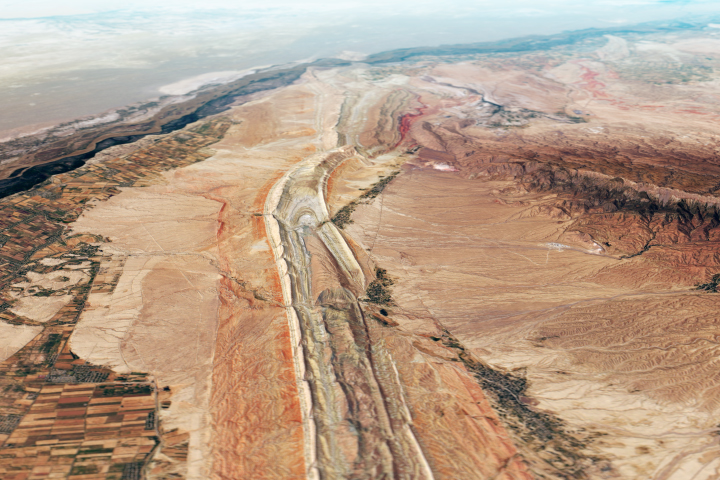 This color-coded map shows rainfall anomalies for northeastern Brazil from June 7 to June 20, 2010.