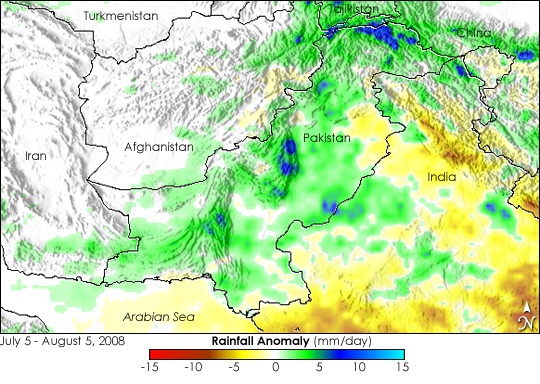 Unusually intense monsoon rains pounded Pakistan in late July and early August 2008. This image compares rainfall as observed by the Tropical Rainfall Measuring Mission (TRMM) satellite between July 5 and August 5, 2008, to average rainfall normally seen during Pakistan’s July monsoon. Areas that are blue or green received more rain than average, while areas that are yellow or brown received less rainfall. Pakistan stands out from the surrounding countries in that it alone received significantly more rain than average in July 2008. The intense rains triggered deadly floods that forced at least 82,000 from their homes, caused 27 deaths, and destroyed thousands of homes and many agricultural fields, reported CNN.

The Tropical Rainfall Measuring Mission (TRMM) is a joint mission between NASA and the Japan Aerospace Exploration Agency, JAXA.