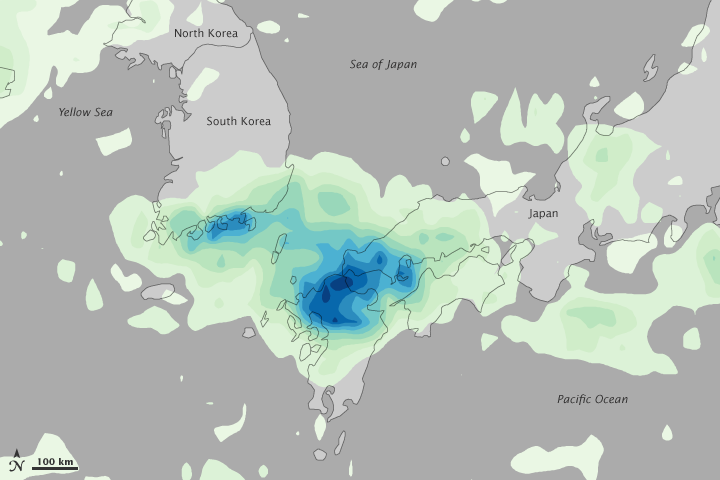 The 2009 summer monsoon brought torrential rains to southwestern Japan in July. This image shows rainfall estimates for southern Japan and the surrounding region from July 20–27, produced by the near-real-time, multi-satellite precipitation analysis at NASA’s Goddard Space Flight Center. The analysis is based largely on observations from the Tropical Rainfall Measuring Mission (TRMM) satellite.

The most prominent feature is a large bull’s-eye of heavy rain centered over the northern part of Kyushu and the southwestern tip of Honshu. Rainfall totals exceeded 600 millimeters (about 24 inches, show in deep blue) at the center of this rain area, with lesser amounts of up to 150 millimeters (about 6 inches, shown in pale green) extending into central Japan. The heavy rains led to widespread flash flooding and numerous landslides. As of late July 2009, eight people were reported to have died as a result, with nine more still missing, according to news reports.

Each year as the Earth’s orbit brings the Northern Hemisphere back under more direct sunlight, the Asian continent starts to heat up. Land surfaces have less heat capacity than surrounding oceans, and they heat up faster. This land-sea temperature difference causes the winds to shift; warm air rises over the continent, and moist air from over the oceans flows in to replace it. In East Asia, the boundary between the warm, humid air from the ocean to the south and the continental air to the north often becomes more or less stationary.

This stationary front is known as the Baiu front in Japan and as the Mei-yu front in China. The location of the front migrates slowly northward over eastern China, Korea, Taiwan, and Japan over the course of spring and early summer, providing a focus for showers and rain, especially when waves of low pressure move along the front. Mei-yu means “plum rains” in Chinese, so called because the widespread rains often occur at the time when plums ripen, which is typically May and June. Baiu season in Japan typically runs from June through July.

Global satellite-based observations of heavy rain and flood inundation potential (calculated from a hydrological model) are updated every three hours and posted online on the Global Flood and Landslide Monitoring page on the TRMM Website.