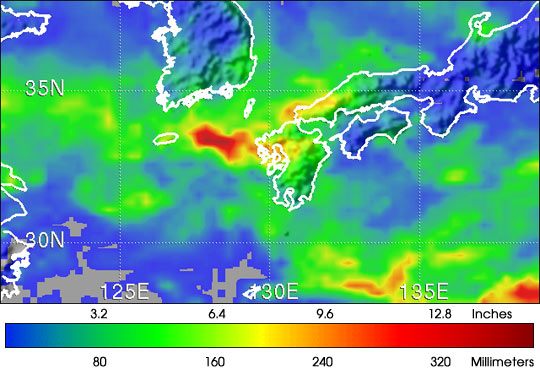 Heavy rains fell over and around southern Japan over the past week triggering numerous mudslides that were responsible for killing 14 people with several still missing. The Tropical Rainfall Measuring Mission-based, near-real time Multi-satellite Precipitation Analysis at NASA Goddard Space Flight Center shows rainfall totals for the period of July 14-21, 2003. The heaviest amounts are over the western part of Kyushu with rainfall totals of up to 10 inches (red areas). Upwards of 8 inches of rain (yellow areas) fell over the southern part of Honshu. The heavy rains were produced by a wet seasonal frontal system. The Tropical Rainfall Measuring Mission is a joint mission between NASA and the Japanese space agency, NASDA.

Patterns running from pale green to deep blue are draped over southern China, showing rainfall totals for the week of June 4 through June 11, 2007. Though seasonal rains are not unexpected in the area, the rain that fell during the week was torrential and relentless. As the image shows, a broad stretch of China received up to 200 millimeters of rain, and some areas were inundated with up to 500 millimeters.