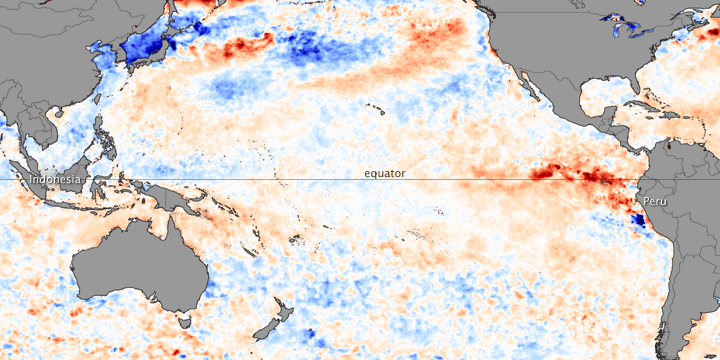 In July 2009, the National Oceanic and Atmospheric Administration (NOAA) Climate Prediction Center reported that ocean temperatures in the central and eastern Pacific had shifted into El Niño—anomalously warm—conditions. El Niño conditions are evident in this sea surface temperature anomaly image based on data from the Advanced Microwave Scanning Radiometer for EOS (AMSR-E) on NASA’s Aqua satellite on July 26. THe current data are compared to long-term average temperatures (1985-1997) measured by the Advanced Very High Resolution Radiometers that have flown on several NOAA missions.

The Pacific is Earth’s largest ocean, so it shouldn’t be surprising that the Pacific’s primary climate pattern—the El Niño-Southern Oscillation, which climatologists shorten to “ENSO,”—is the single biggest influence on the average temperature, rainfall, and vegetation conditions in the tropics. ENSO includes an ocean component (the El Niño/La Niña pattern) as well as an atmospheric component, the Southern Oscillation.

Every 3-8 years, the prevailing easterly winds over the eastern equatorial Pacific weaken or reverse, water temperatures in the central and eastern Pacific climb, and rainfall declines over most tropical land areas. In 1997-98, an historically strong El Niño event contributed to devastating fires in Indonesia’s tropical forests. The fires released huge amounts of greenhouse gases into the atmosphere, and they led to the complete destruction of the Mentawai coral reefs west of Sumatra.

According to David Adamec, head of the Ocean Sciences Branch at NASA Goddard Space Flight Center, the development of El Niño ocean conditions isn’t a guarantee that a full-blown ENSO event will grip the climate by winter. So far, he says, the atmospheric component of the pattern, the Southern Oscillation, isn’t fully cooperating. As of July 26, the trade winds in the western Pacific (near Indonesia) had shifted direction and were blowing weakly toward the east (see NOAA wind anomaly graphic), but across the central and eastern Pacific, easterly trade winds were still of average or slightly above-average strength. For an ENSO event to fully develop, Adamec explains, the easterly trades will have to weaken across a much wider area of the Pacific than they have at present.