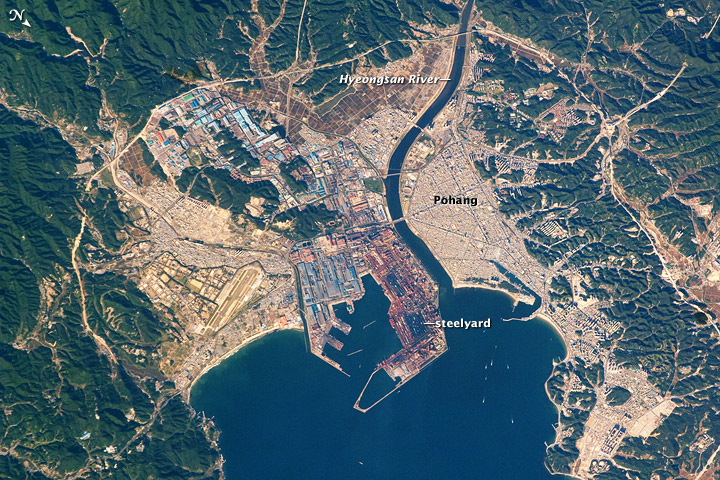 The port city of Pohang is located on the eastern coastline of South Korea and provides access to the East Sea and Sea of Japan. In this astronaut photo from June 12, 2009, the urban fabric of Pohang is strikingly divided by the Hyeongsan River. To the west of the river, residential and commercial development is characterized by small-footprint, gray- and white-roofed buildings connected by a dense road network.

The eastern side of the river is dominated by industrial development associated with the Pohang Iron and Steel Company (POSCO) steelyard. This development (image center) includes large factory and storage buildings with striking light blue and light red rooftop. Green vegetated hills and mountains border the urban area to the east, west, and south, and several vegetated hills remain within the industrial area. Numerous boat wakes are also visible to the east-northeast of the POSCO steelyard docks.

While the Pohang area has been occupied by small fishing villages since approximately 1500 BC, development of an urban area only began in 1930 when harbor facilities were constructed. POSCO began construction of a large steel mill and associated facilities in 1968, with production of steel products commencing in 1972. The steel industry is still a major component of the city’s economic base, but recent efforts to lessen dependance on heavy industry has fostered new interest in environmentalism and culture within Pohang.

Astronaut photograph ISS020-E-9011 was acquired on June 12, 2009, with a Nikon D2Xs digital camera fitted with a 400 mm lens, and is provided by the ISS Crew Earth Observations experiment and Image Science & Analysis Laboratory, Johnson Space Center. The image was taken by the Expedition 20 crew. The image in this article has been cropped and enhanced to improve contrast. Lens artifacts have been removed. The International Space Station Program supports the laboratory to help astronauts take pictures of Earth that will be of the greatest value to scientists and the public, and to make those images freely available on the Internet. Additional images taken by astronauts and cosmonauts can be viewed at the NASA/JSC Gateway to Astronaut Photography of Earth. Caption by William L. Stefanov, NASA-JSC.

The roofs of Barcelona’s buildings appear as a widespread pink swath on the Mediterranean coastal plain, between forested hills (dark green, top) and the sea. The Llobregat River enters the view top center, cuts through a canyon in the hills and historically constructed a broad, convex delta south of the forested hills. Channelization of the Llobregat River to control flooding has encouraged development of the delta for a variety of urban and agricultural land uses. Barcelona’s airport is located in the central portion of the delta, while the western portion is used for intensive agriculture (light green areas).