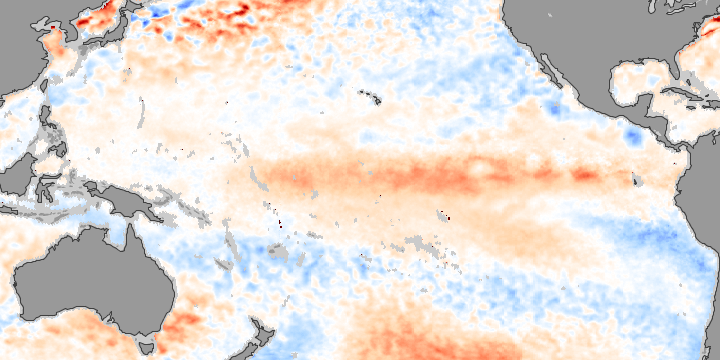 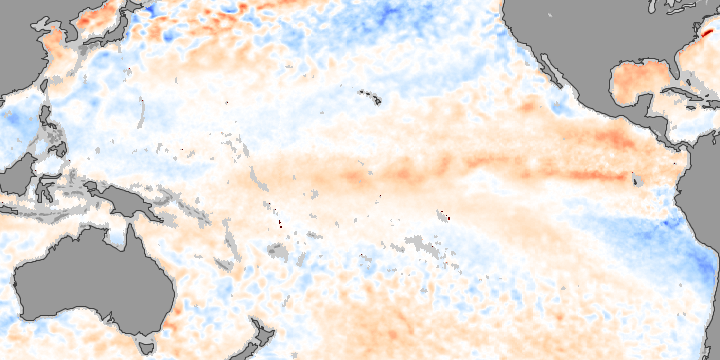 On December 10, 2009, the National Oceanic and Atmospheric Administration (NOAA) reported that El Niño conditions spotted earlier in 2009 had strengthened. From October to November 2009, sea surface temperature anomalies increased across the eastern and central equatorial Pacific Ocean. Predictions varied, however, regarding when El Niño would reach its peak strength.

These color-coded images show El Niño conditions in November (top) and October (bottom) 2009. The images are based on data from the Advanced Microwave Scanning Radiometer for EOS (AMSR-E) on NASA’s Aqua satellite. White areas show where sea surface temperatures were near normal, orange-red areas show unusually warm waters, and blue areas show unusually cold waters. The animation shows daily changes in October and November 2009. In the later image, sea surface temperatures across the equatorial Pacific have increased. What was a broad band of orange in October with two streaks of red in the eastern Pacific has become an intense band of red. Increased sea surface temperatures also appear in the higher latitudes—east of Japan, around Australia, and in the South Pacific midway between South America and New Zealand.

El Niño is only one facet of climate pattern that involves both the ocean and the atmosphere. The atmospheric component is called the Southern Oscillation, which is a strengthening or weakening of the difference in air pressure between the western and the eastern Pacific. During a negative phase of the Southern Oscillation (which is the phase linked to El Niño events in the water), air pressure at the surface of the Pacific around Indonesia becomes unusually high, while the pressure at the surface over the eastern Pacific becomes unusually low. It is the combination of ocean and atmosphere disruptions that produces such strong impacts on global climate patterns. The NOAA Climate Prediction Center stated that this El Niño-Southern Oscillation event would likely continue strengthening or remain moderately strong over the next few months, exerting a substantial influence on global weather and climate during that time.