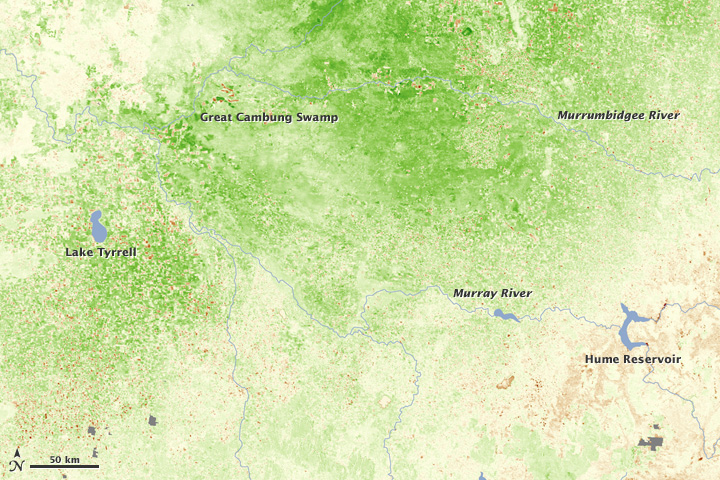 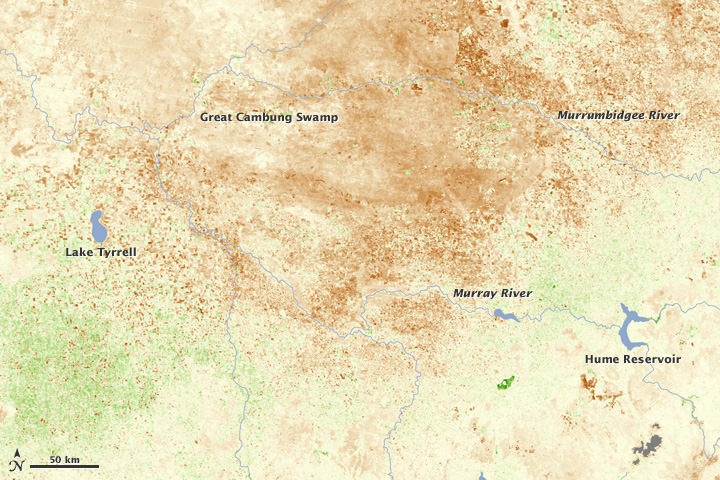 Over the past decade, the climate has been punishing for farmers in southeastern Australia’s “Wheatbelt.” As 2009 drew to a close, the southeastern states of Victoria and New South Wales were enduring their third year of drought, and forecasters could offer little hope that the sustained, above-average rains needed to break the pattern would materialize in early 2010.

These satellite-based vegetation images are part of a series that spans the entire decade. Centered on the agricultural areas near the Murray River, Australia’s largest river, between Hume Reservoir and Lake Tyrrell, they show vegetation conditions for a 16-day period in the middle of September in 2005 and 2009 compared to the average mid-September conditions over the decade. Places where the amount and/or health of vegetation was above the decadal average are green, average areas are off-white, and places where vegetation growth was below average are brown.

Here at the border between the state of Victoria (south of the Murray) and New South Wales (north of the river), mid-September is the height of the growing season for cereal grains, including wheat, barley, and oats. Fields have a distinct appearance, creating a patchwork of geometric shapes. Areas where the vegetation appears smoothly continuous (such as in the top center, east of the Great Cambung Swamp) are more likely to be pasture or natural vegetation than cropland. The lower right corner of the image (around Hume Reservoir) is occupied by the mountain ranges whose streams deliver much of the Murray River’s water volume.

While the overall pattern in each year is unmistakable—2005 was the last year of good growing conditions—there are localized differences in how crops responded to the climate. These differences could have numerous causes, from localized rainfall to variability in the drought-tolerance of an area’s predominant crop type. At the individual field level, a brown or green patch in a single year could indicate a crop that was struggling or flourishing, but it could also reflect a management decision to plant or harvest at a different time or to leave a field fallow.

The images in this series are based on vegetation observations collected by the Moderate Resolution Imaging Spectroradiometer (MODIS) on NASA’s Terra satellite, which passes a major mission milsetone—ten years in orbit—this December. Observations from Terra and its sister satellite Aqua, launched in 2002, are helping ecologists and climate scientists monitor the impact of short- and long-term climate change on Earth’s natural and agricultural ecosystems.

This pair of images shows vegetation conditions in southeastern Australia&rsquos Wheatbelt in 2005, the last year this decade with favorable growing conditions, and 2009, at the end of three consecutive years of drought.