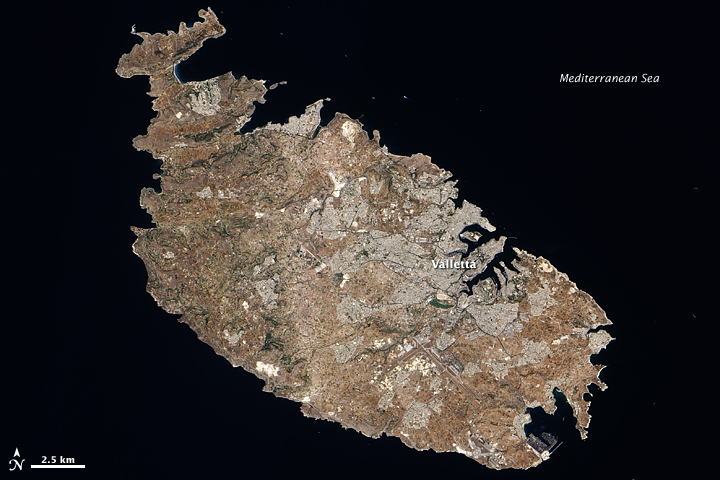 The largest island in the Republic of Malta archipelago, the island of Malta spans some 27 kilometers (17 miles) from northwest to southeast. The island sits in the Mediterranean Sea, south of Sicily. Graced with numerous bays serving as natural harbors, Malta may originally have been reached by raft 7,000 years ago, and it has been inhabited ever since. Malta is not only one of Europe’s smallest countries, but also one of its most densely populated.

The Advanced Land Imager (ALI) on NASA’s Earth Observing-1 (EO-1) satellite captured this true-color image of Malta on August 12, 2009. Against the backdrop of black ocean water, Malta appears in shades of gray, beige, brown, and green. Gray cityscape stretches over much of the island, centered around the bustling port city of Valletta on the northeast coast, which hosts cruise ships, ferry boats, and yachts.

Away from the urbanized areas, the landscape alternates between cropland and natural vegetation. Malta’s winters are usually mild, but occasional wintertime frosts as well as high summer temperatures limit vegetation growth. Only a few patches of deep green appear in this shot, mostly on the western third of the island. The island’s terrain consists primarily of rocky, flat lowlands. Malta has no permanent rivers or lakes, but temporary waterways can form after heavy rains.

Artifacts found on the island suggest that Malta was inhabited as long ago as 5,200 BC, and the island is now home to three United Nations Educational, Scientific and Cultural Organization (UNESCO) World Heritage Sites: the city of Valletta, the subterranean architecture of Hal Saflieni Hypogeum, and Bronze Age megalithic temples.