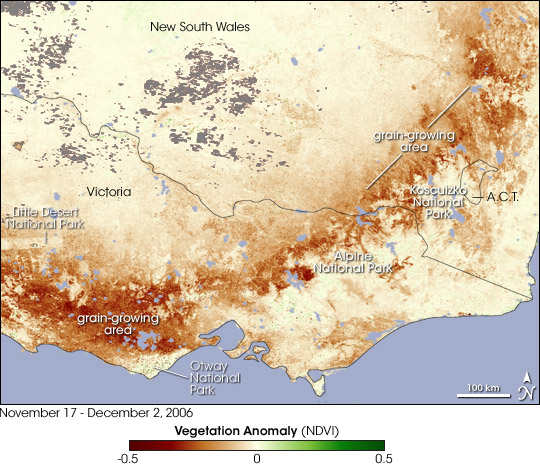 Rainfall in southeastern Australia in 2006 was well below average, and average temperatures for the continent in November 2006 hit a record high. The climate punished vegetation across the region. In November 2006, observations of vegetation conditions captured by the Moderate Resolution Imaging Spectroradiometer (MODIS) on NASA’s Terra satellite revealed how vegetation was struggling across much of the region. The image compares conditions in 2006 to the average November conditions from 2000-2005. All the brown areas indicate less abundant vegetation than the average. Only small, faint areas of slightly above-average vegetation conditions (green) are visible in a few locations. Gray areas indicate patches of missing data, perhaps due to persistent clouds or extremely bright soils (such as dry, salt-covered lake beds.)

In many cases, areas of natural vegetation fared better than agricultural lands, appearing yellowish (average) or very light brown (slightly below average). In some cases, the locations of national parks are as obvious as if their boundaries had been drawn on the map. For example, in western Victoria, where wheat and other cereal grains are grown, the Little Desert, Grampians (southeast of Little Desert, not labeled), and Otway National Parks stand out as yellow or even yellow-green patches amid the dark brown swath of the croplands. In eastern Victoria and southern New South Wales, the vegetation of the Great Dividing Range Mountains, which run through Alpine and Kosciuszko National Parks, appears to be far closer to average conditions for this time of year than the vegetation in the inland grain-growing areas. This difference isn’t surprising since native vegetation is better adapted to Australia’s regularly occurring dry spells, whereas crops often depend on irrigation that can be difficult to sustain in drought conditions.

The difference in greenness between native vegetation and cropland may not just be because native vegetation is better adapted to drought, however. Research in southwestern Australia indicates that the replacement of dark-colored native vegetation with paler agricultural crops, such as wheat, has changed where rain falls. The large-scale, over-turning motion of heated air (convection) that produces rain clouds occurs less often over croplands than over native vegetation. Models and observations suggest that converting natural vegetation to croplands actually reduced the amount of rainfall in those areas. Perhaps a similar effect has taken place in the region pictured here, as well.