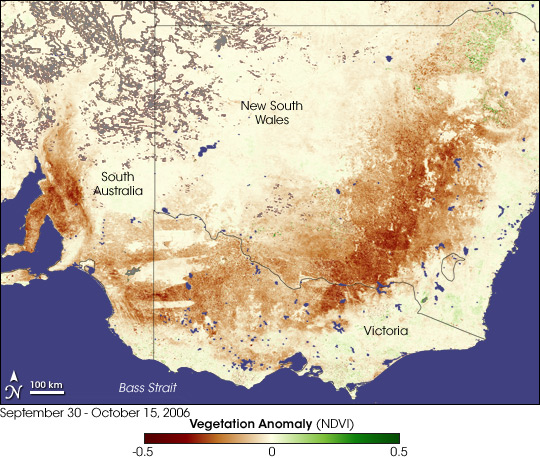 Spring started warm and dry in much of Australia. In addition to high land surface temperatures in September 2006, many of the country’s agricultural areas were facing 6- to 12-month rainfall deficiencies that the Australian Bureau of Meteorology categorized as serious, severe, or lowest on record. In southern Western Australia, one of the country’s prime wheat-growing regions, rainfall between April and September was less than half the average amounts. Parts of South Australia, much of Victoria, and south-central New South Wales had been racking up deficits for 9 to 12 months or longer. Severe drought had settled over many areas.

A wide brown arc reaches from coastal South Australia, eastward through Victoria, and northward into New South Wales. In South Australia, the brown area covers cropland for barley, rapeseed, and wheat. In Victoria, the affected area includes those same crops plus sunflowers. All those same crops are grown in southern New South Wales, but the affected area also includes rice-growing areas. Farther north, closer to the border of Queensland, the brown arc of below-average vegetation conditions covers sorghum- and cotton-growing regions.

The rainfall deficits and warm temperatures that are so strongly affecting croplands do not appear to be having as extreme an effect on natural vegetation. For example, at the border of South Australia and Victoria, several roughly rectangular areas show near-average vegetation conditions (yellow). The rectangles of comparatively normal vegetation trace out several National Parks. The brown arc extending from Victoria into New South Wales is inland of The Great Dividing Range Mountains, which follow the coastline of eastern and southeastern Australia. These mountains, home to many parks and protected areas, do a good job of ringing rainfall out of moist air coming in off the ocean, and this coastal area appears not as severely stressed as the inland crop-growing regions.

Australia is prone to drought because of its geographic location. Much of Australia lies in a latitude belt that is under the influence of an atmospheric phenomenon known as the subtropical high. Just outside of the tropics in each hemisphere lies a swath of the globe where air frequently sinks toward the Earth’s surface from higher in the atmosphere. The air warms and dries as it sinks, creating semi-permanent zones of high air pressure at the surface. These subtropical highs are areas of stable, warm, and dry air that favor clear skies and little rainfall. (In the Northern Hemisphere, several large deserts, including the Sahara, reside in the latitudes of the subtropical high.) Many drought episodes in the eastern and northern part of the Australia are linked to El Niño episodes. A relatively mild El Niño was underway in late 2006.