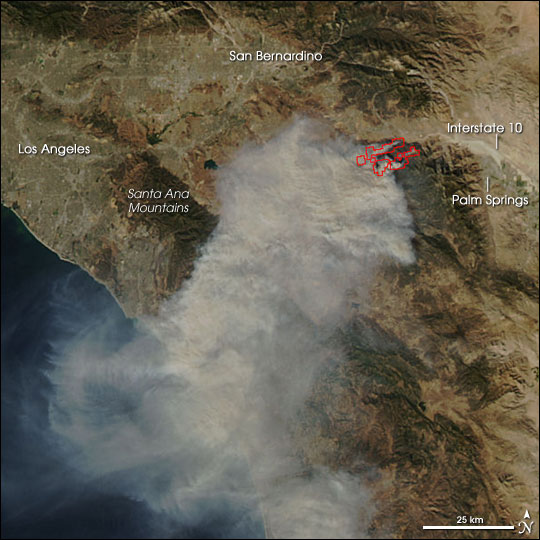 Waves of gray-brown smoke washed over the mountains southeast of Los Angeles and out over the Pacific on October 26, 2006. West of Palm Springs, California, the Esperanza Fire had ballooned under the influence of Santa Ana winds to more than 19,000 acres as of the morning of October 27, according to the daily report from the National Interagency Fire Center. Racing through grass, brush, and timber, the blaze had forced hundreds to evacuate, and it killed several firefighters who were working to protect homes. Fire officials are reporting the cause of the blaze as arson.

This photo-like image shows the fire and surrounding area captured by the Moderate Resolution Imaging Spectroradiometer (MODIS) on NASA’s Aqua satellite on October 26. Places where MODIS detected actively burning fire are outlined in red. The Santa Ana Mountains peek out from beneath the smoke near the southeastern suburbs of Los Angeles.

Santa Ana winds are a California firefighter’s nightmare. These blustery, dry, and often hot winds blow out of the desert and race through canyons and passes in the mountains on their way toward the coast. The air is hot not because it is bringing heat from the desert, but because it is flowing downslope from higher elevations. As fall progresses, cold air begins to sink into the Great Basin deserts to the east of California. As the air piles up at the surface, high pressure builds, and the air begins to flow downslope toward the coast. When winds blow downslope, the air gets compressed, which causes it to warm and dry out. In fact, the air can warm at a rate of 10 degrees Celsius per kilometer of descent (29 degrees Fahrenheit per mile). Canyons and passes funnel the winds, which increases their speed. Not only do the winds spread the fire, but they also dry out vegetation, making it even more flammable.

A 250-meter-resolution KMZ file of the Esperanza Fire is available for use with Google Earth.

Waves of gray-brown smoke from the Esperanza Fire washed over the mountains southeast of Los Angeles and out over the Pacific on October 26, 2006.