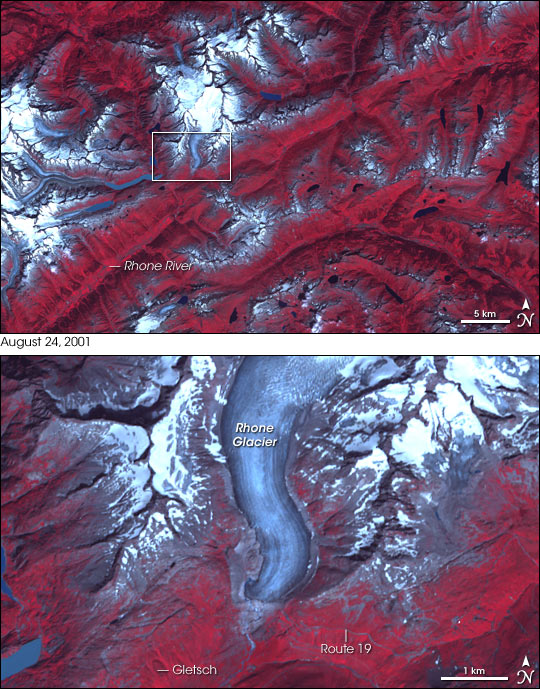 High in the Alps of south-central Switzerland, the Rhone Glacier tips southward from the southern slopes of the massive Dammastock Peak. As the source of the Rhone River, the glacier is one of the primary contributors to Lake Geneva, about 155 kilometers (96 miles) downstream to the west. During the Ice Age, the Rhone Glacier would have filled the long, narrow valley through which the river now flows. Today, small alpine towns overlook the valley, offering stopping over points for sight-seers and adventurers.

This pair of images from the Advanced Spaceborne Thermal Emission and Reflection Radiometer (ASTER) on NASA’s Terra satellite shows the rugged terrain of south-central Switzerland, with a close-up view of the Rhone Glacier (below). Made from a combination of visible and infrared light that ASTER detected, the image shows snow in white, vegetation in red, and water in bright or deep blue. Glaciers appear bluish-gray, sometimes dusted with white. Between the vegetation line and the snow cap, bare gray-brown rock is exposed on many of the mountain slopes. The image was captured on August 24, 2001.

Although glaciers have been retreating in the Alps and other mountain locations since the end of the Ice Age, change in the last few decades has been rapid. This recent, rapid decline in glaciers is almost certainly due to human-caused global warming. The Rhone is one of the region’s shrinking glaciers. Tourist towns such as Gletsch, which depend on the attraction of the glacier, are reportedly going to heroic lengths to protect the glacier during the hot summers, covering the terminus of the glacier with insulating blankets to try to slow the melt. The retreat of glaciers in the Alps doesn’just affect tourism. The glaciers are an important part of the water supply, and the melting and crumbling of glacier margins can destabilize steep mountain slopes, causing avalanches of rock and ice.