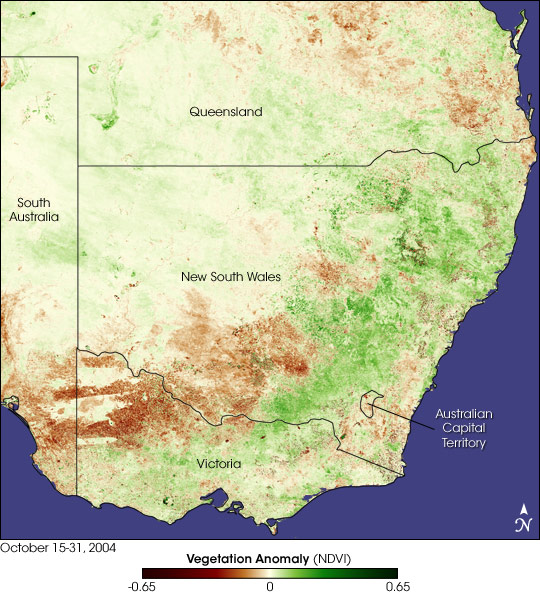 Even as official figures confirmed huge leaps in grain production throughout Australia since drought stunted crops in 2002, the winter crop of 2004 suffered from a dry start to the season. Winter grains normally require rain in September. In 2004, little rain fell across much of eastern Australia’s crop-growing regions. Some rain did fall in the Southeast in October and November, but it came too late for the winter grain crop. The approaching summer brought high temperatures and strong winds in October and November, which desiccated the crops and other vegetation. As a result, below average yields are expected, says James Crutchfield, a crop analyst at the United States Department of Agriculture’s Foreign Agricultural Service. The drop in production could be difficult for farmers in those areas suffering from their third consecutive season of drought.

The impact of the dry, hot weather is visible in this image, based on vegetation “greenness” data collected by the Moderate Resolution Imaging Spectroradiometer (MODIS) on NASA’s Terra satellite. (Satellite observations of vegetation are commonly represented using a scale called the Normalized Difference Vegetation Index, or NDVI.) Observations collected by MODIS between October 15-30, 2004, were compared to a three-year average of conditions for the same time period. By comparing current measurements with a long-term average, we can tell how healthy and dense the vegetation is compared to normal. Regions that are drier and less healthy than in the previous three years are shown in brown, while areas of greener-than-normal vegetation are shown in green.

The lower left corner of the image shows a pattern of dryness in southern New South Wales, Victoria, and South Australia. The strips of tan and green within the brown area coincide with the boundaries of three national parks. The parks are areas of native vegetation, but the surrounding regions have been planted with rain-fed crops. The native vegetation shows little response to the dry spring; the surrounding regions are much more stressed than normal. The arch of dark green that curves from the northeast across the dry area corresponds to the Great Dividing Range Mountains where much of Australia’s rain falls. On the coastal side of the mountains, the southeastern tip of Australia also appears to be dry.

The third area that seems to be stressed by a dry spring is some of the coastal areas of southern Queensland. In this area, a separate analysis of a type of energy called “outgoing longwave radiation,” revealed to scientists the most stressed locations correspond to areas where fewer clouds than normal gathered in 2004. For a related story on the use of outgoing longwave radiation measurements for monitoring clouds and rain, see “Early Dry Season in Southeast Asia.”)

NASA image of NDVI anomaly by Jesse Allen using MODIS data provided by Inbal Reshef as part of the Global Agricultural Monitoring Project involving NASA, USDA’s Foreign Agricultural Service (FAS), and the University of Maryland. Assaf Anyamba from the Goddard Earth Sciences Technology Center, and James Crutchfield with FAS, contributed to the caption as part of the same partnership. More data and information about this joint project is available at Satellite Information for Agricultural Monitoring.