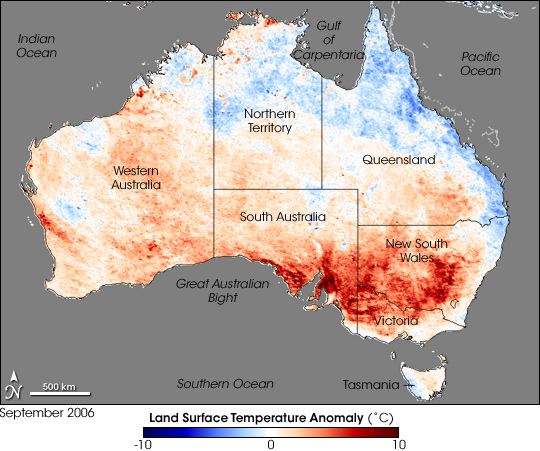 Much of Australia experienced record-breaking warmth in September 2006. For a swath of the continent across northern sections of Western Australia, Northern Territory, and Queensland, the monthly average of the days’ highest temperatures (average maximum temperature) was near or a little below normal, according to maps from the Australia Bureau of Meteorology. But across the bulk of Australia, average maximum temperature was several degrees Celsius above normal.

This image uses land surface temperature data collected by the Moderate Resolution Imaging Spectroradiometer (MODIS) on NASA’s Terra satellite to illustrate the unusually warm September. Places where the average daily temperatures in September 2006 were warmer than the five-year average (2000-2005) are red, places where temperatures were near average are white, and places that were cooler than the average are blue. Clearly, warmer-than-average temperatures were more common than cooler-than-average temperatures. Most of Western Australia, Northern Territory, South Australia, New South Wales, and Victoria are draped in red. Southeastern Australia is intensely red, with day time land surface temperatures up to 10 degrees Celsius hotter on average than they had been in the previous five years. The coastal area surrounding the Gulf of Carpentaria, Queensland’s Cape York Peninsula, and coastal New South Wales managed to escape the rest of the country’s overheated fate.

According to the Australian Bureau of Meteorology, the mild El Niño conditions brewing in the equatorial Pacific Ocean in 2006 were probably contributing to the unusually warm, dry conditions in Australia. In the agency’s October 11, 2006, summary, they indicated that rainfall and temperature outlooks for the remainder of the year included drier- and warmer-than-average conditions for eastern and northern Australia. That outlook is not good news for farmers and ranchers who have been struggling for several years through a severe drought.