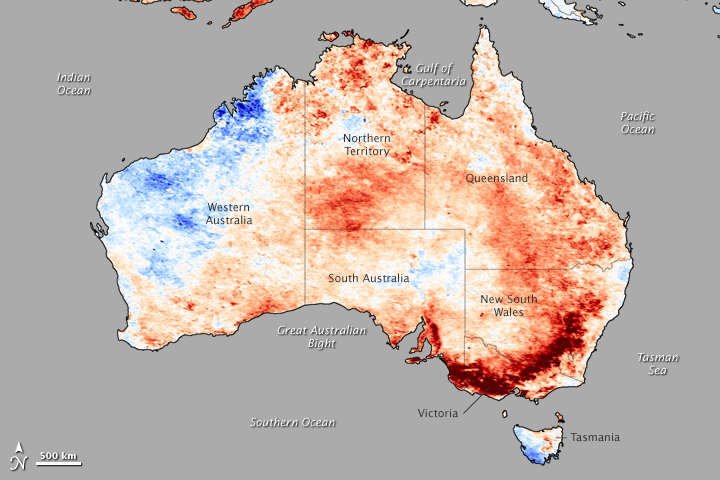 Deep red paints the coastal mountains of southeastern Australia, hangs over the continent’s arid interior, and dots much of the rest of the land in this image, indicating that unusually high temperatures reigned in November 2006. According to the Australian Bureau of Meteorology, the monthly average temperature for the country hit a record high in November. The average temperature for the continent was 2.11 degrees Celsius warmer than average, with local temperatures rising more than 4 degrees C above average for the month in places.

The temperature anomaly was greatest in the Great Dividing Range, which curves along the coasts of Victoria and New South Wales in southeast Australia. The heat and a lack of spring rain may have primed the mountains for devastating wildfires. By the end of December, several large wildfires raced through the mountains, threatening local communities and clouding the skies over much of southeastern Australia with dense smoke.

The high temperatures in the Great Dividing Range and elsewhere were just part of an unusually warm and dry spring, which in turn, was an extension of a dry year. Some of the dryness may be linked to a weak El Niñno in the Pacific Ocean. El Niñno is a regular climate pattern during which sea surface temperatures in the eastern Pacific Ocean near the equator heat up and trade winds weaken. Though the effects of El Niñno vary, the phenomenon often changes rainfall patterns around the world. In Australia, El Niñno often brings a dry winter and spring. It is also linked to an increase in the number of extreme fire days, during which conditions are hot, dry, and windy.