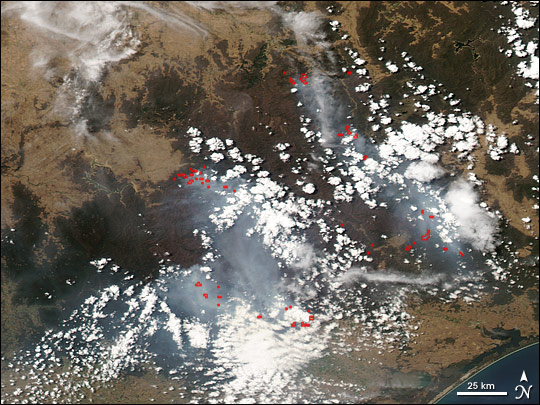 Following an unusually warm and dry November 2006, Australia suffered from an unsurprising spate of fires the following month.

On December 29, 2006, the Moderate Resolution Imaging Spectroradiometer (MODIS) flying onboard NASA’s Aqua satellite captured this image of fires burning in Victoria, Australia. In this image, the fires appear as red hotspots—areas with elevated surface temperatures. The pale gray smoke streaming from these fires contrasts with the fluffy, opaque white clouds dotting the sky in the same area. Although more translucent than the clouds, the smoke plumes are still thick enough to block the satellite’s view of the underlying ground surface.

Firefighters in Victoria, Australia enjoyed a brief respite in temperatures near the end of December 2006. According to the Australian Broadcast Corporation, firefighters prepared for warmer weather to come by back burning areas that would otherwise likely catch fire. Despite such control efforts, fires in Victoria were still forecast to keep burning for months.

A 250-meter-resolution KMZ file of the Victoria fires is available for use with Google Earth.