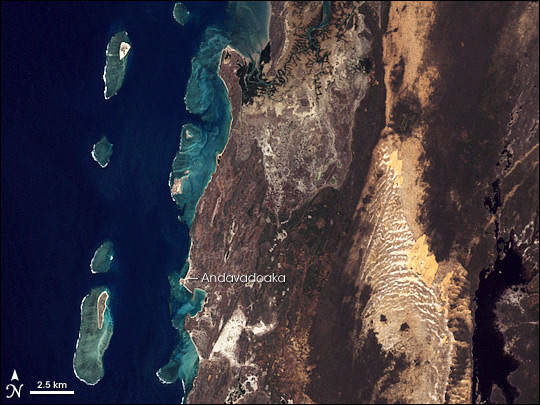 Rising ocean temperatures are having a significant negative impact on coral reefs in many parts of the world. When temperatures rise too much, the coral expel the colorful algae that grow symbiotically with them. Without the algae, the coral turn white, a process known as bleaching. While bleaching may be an adaptive mechanism that allows corals to take up with a different species of algae that may be more tolerant of changing water conditions, bleaching that is intense, sustained, or frequent can result in the death of the reef and local-scale extinction.

Among the reefs affected by major bleaching events since the late 1980s are these reefs off the southwestern coast of the island of Madagascar, located in the Indian Ocean off the southeast coast of Africa. The reefs give the water a characteristic turquoise “glow.” Reefs fringe the coast and surround offshore barrier islands. (Small, isolated “patch reefs” are scattered across the lagoon, but are too small or submerged to be seen in this image.) Landsat observations like this one, captured on June 27, 2000, have been used to create a global map of the location and structure of Earth’s reefs as part of a project called the Millennium Coral Reef Mapping Project.

According to data collected during diving surveys in the waters near the Andavadoaka fishing village between 2004 and 2006, most of Madagascar’s southwestern reefs were damaged by mass bleaching in response to very warm ocean temperatures in 1998 and 2000. Near-shore, fringing reefs suffered the highest mortality rates. Some reefs lost nearly 99 percent of their coral cover, and were showing no signs of recovery. Barrier reefs had been affected by bleaching, but were showing some signs of recovery, while the patch reefs remained in the best condition. At least one patch reef survived the mass coral bleaching experienced in 1998 and 2000, making it extremely interesting to scientists trying to understand and predict reef resilience in the face of anticipated climate change.