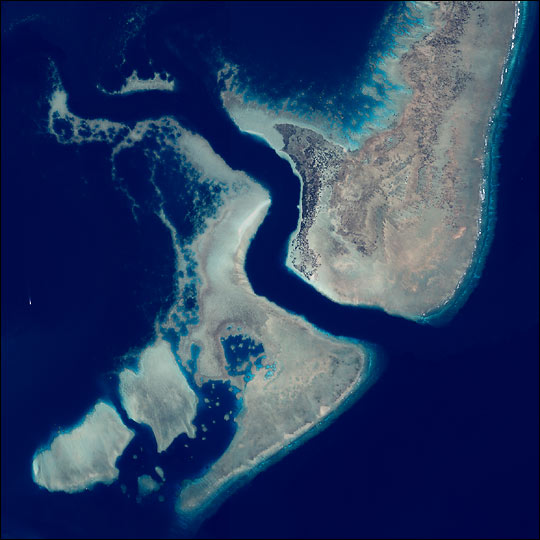 The territory of Mayotte encompasses one of the largest coral lagoons in the world, more than 1000 square kilometers in size. Situated in the Mozambique Channel between Madagascar and the African mainland, the territory's islands are surrounded by a wide fringing reef, cut by several channels. The above true-color image shows one such channel on the east side of the lagoon. Produced from high-resolution data (the resolution of the large image is 4 meters per pixel) from Space Imaging's IKONOS satellite, scientists are using this and similar images to map coral reefs and monitor coral reef health.

Like other coral reefs worldwide, the health of Mayotte's reefs has declined in the past 20 years. Natural threats to the reefs include cyclones and crown-of-thorns starfish, but most of the damage is being caused by the increasing population of the islands. Increased runoff from agriculture, over fishing, direct damage due to people walking on the shallow reef flats, and water pollution are taking a toll on the coral and other sea life.

To learn more about monitoring coral reefs from space, read Mapping the Decline of Coral Reefs.