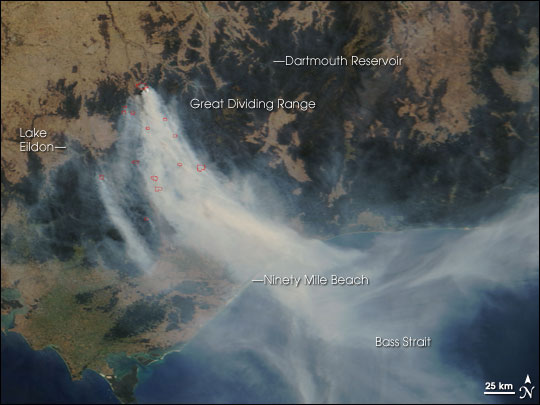 A river of smoke more than 25 kilometers wide flowed southeast toward the Tasman Sea from fires burning in the Great Dividing Range Mountains in Victoria, Australia, on December 5, 2006. This image from the Moderate Resolution Imaging Spectroradiometer (MODIS) on NASA’s Terra satellite shows the smoke crossing Ninety Mile Beach and spreading out over the sea. Fires (red outlines) were detected across a broad area of the mountains between Lake Eildon and the Dartmouth Reservoir. According to news reports, 50 fires—most of them in remote forests and parks—were burning out of control across Victoria in early December, and fire conditions were predicted to worsen in subsequent days.

Across Australia in 2006, fires sprang up before summer was even officially underway. An ongoing drought and high temperatures have created extremely risky conditions for fires in many parts of the country. In late November and early December, satellites captured numerous images of fires in places as far flung as northwestern Australia and Southern Queensland. (See other images in the Natural Hazards: Fires section.) In most of Victoria (among other places in the country), rainfall in the six months preceding the outbreak of these fires was categorized as either at a “severe deficiency” or “lowest on record,” according to maps provided by the Website of the Australian government’s Bureau of Meteorology.

The Bureau’s November 22, 2006, seasonal El Niño-Southern Oscillation update indicated that the current El Niño had strengthened throughout November. A strong El Niño could be bad news for firefighters in southeastern Australia. According to the Bureau of Meteorology Website, “El Niño events are associated with an increase in the number of extreme fire-risk days over southeastern Australia, that is, days which are hot, dry and windy.”

The high-resolution image provided above has a spatial resolution of 250 meters per pixel. The MODIS Rapid Response System provides twice-daily images of the area in additional resolutions.

A 250-meter-resolution KMZ file of the Victorian fires is available for use with Google Earth.