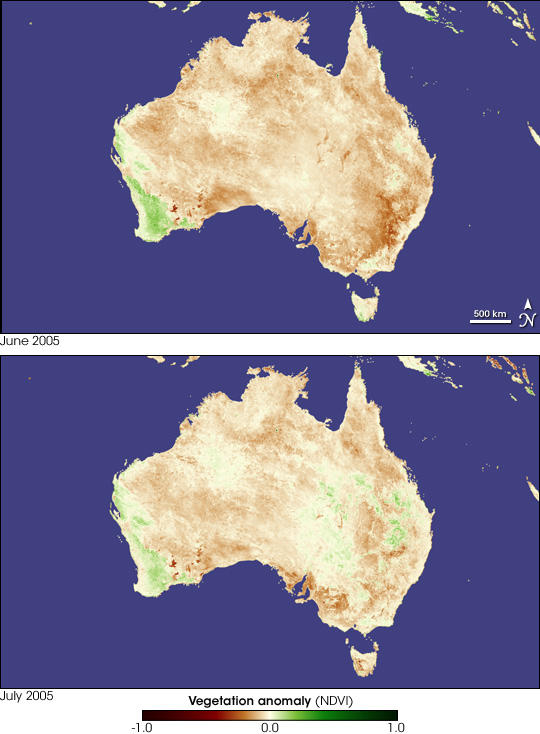 Some Australian farmers are finally getting a break from the dry weather that has plagued the country since 2002. Winter rains began to fall over the drought-stricken country in June and continued in the southeast through July. The result on vegetation is clear from these vegetation anomaly images. The images, taken by the SPOT Vegetation satellite, show where vegetation is more dense and healthy than average in green. Drought-affected regions, where vegetation is thinner than average, are brown.

In June 2005, top, most of Australia was still in drought. Vegetation was much thinner than normal, particularly in the southeastern part of the country where crops are grown. The other major crop area, southwestern Australia, had a wet autumn. The green that covers the southwestern tip of the continent reveals that crops and natural vegetation were thriving.

With the coming of the rains in June and July, vegetation perked up in eastern Australia. Though much of the continent is still brown, the drought appears far less severe in the east where patches of green are beginning to appear. The drought delayed planting in most of eastern Australia, but the rains have helped crops catch up. The United States Department of Agriculture’s Foreign Agricultural Service reports that winter of 2005 has been the best season for several years in the crop areas of Queensland in eastern Australia.

The rain did not fall evenly across the country, however. Western Australia received less than 40 percent of its average rainfall in July, and the effect on plants is visible in the July image. The green that showed better-than-average conditions in June has faded to tan, showing that vegetation has thinned to average conditions in many areas.

These images are a composite of data collected by the SPOT Vegetation satellite and were generated at NASA Goddard Space Flight Center by the GIMMS Group under analysis agreement with USDA Foreign Agricultural Service, as part of its Global Agricultural Monitoring activities.

The drought that has been plaguing farmers in Australia since 2002 finally began to break with the coming of rain in June 2005.