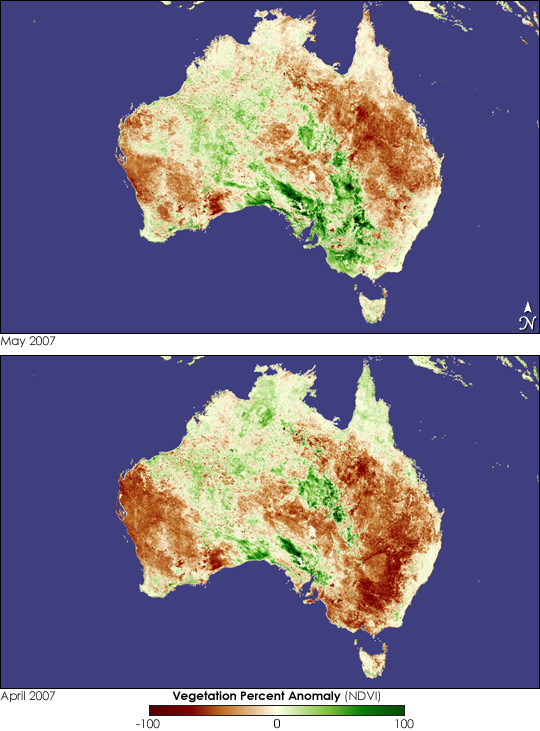 At the end of April 2007, most of Australia remained in the grip of severe drought. April was one of the driest on record for parts of Australia, reported the Australian Broadcasting Corporation, and water levels in the Murray-Darling basin were extremely low. Reservoirs in the Snowy Mountain Hydroelectric Scheme, including Lake Eucumbene, were at ten percent capacity, the lowest they had ever been in their 50-year history. As April turned to May, the El Niño weather pattern that had kept Australia dry broke, and rain began to fall over most of southern Australia and parts of central Australia. Beneficial though the rains were, several months of above-average rainfall will be needed to recover from the drought and begin to refill reservoirs, said the Australian Bureau of Meteorology.

The impact of both drought and rain is demonstrated by this pair of vegetation index images. The data used to make the images were captured by the SPOT vegetation satellite in April 2007 (bottom) and May 2007 (top). The vegetation index is a record of plant growth during the month-long period. Areas that are brown reveal where plants were more sparse or growing more slowly than average. Green areas indicate that plants are growing larger or more quickly than average, in this case, in response to rainfall. It is evident that drought was widespread and extreme in April, particularly in crop regions in the southeast and southwest. In May, the drought is less extreme, but ongoing. The populated southeast in particular saw improved conditions, which is evident in the transition from brown to green. The drought still held sway in the northeast (Queensland) and Western Australia.

These images are a composite of data collected by the SPOT Vegetation satellite and were generated at NASA Goddard Space Flight Center by the GIMMS Group under analysis agreement with USDA Foreign Agricultural Service as part of its Global Agricultural Monitoring activities.